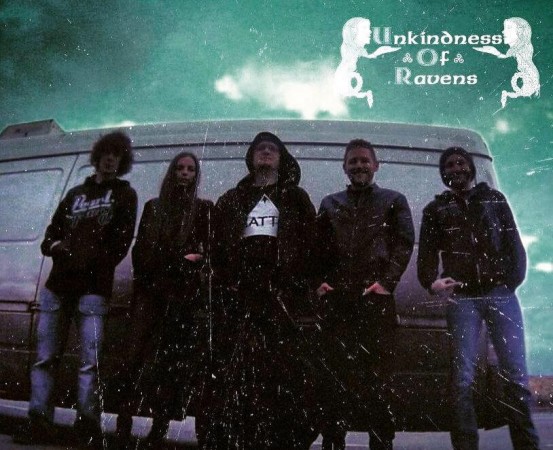 UNKINDNESS OF RAVENS are a darkened Post Rock band from Tipperary/Offaly who take influence from the likes of SABBATH ASSEMBLY, CHELSEA WOLFE, SHAZZULA VULTURA RIDENS and SOPOR AETERNUS & THE ENSEMBLE OF SHADOWS.

They originally started out under the name ROAD RASH in late 2012 as a trio. Their debut “Wolftrap Mountain” EP was officially released in July 2014 which was recorded and mixed by the bands drummer Daryl Hogan, with a couple of music videos being released off the EP. Soon after the EP’s release the band were joined by a fourth member, Danielle Egan, on organ and synths. However! During the early to mid 2015 they were once again back to a three piece for the recording of their debut full length album and renamed the band UNKINDNESS OF RAVENS.

The album “Under Stolen Skies” was recorded with Daryl Hogan on Drums, Danielle Egan on organ and synths, and Darren Keegan handling bass, guitars and vocals. And was released digitally in early November 2015 with a physical digipak CD version being released in early 2016 and distributed by U.S. label Dura Gesta Records.

Originally releasing music and performing live under the name Road Rash (as a motorcycle influenced, southern/stoner-rock style group), the band widened their sound when Danielle Egan joined founding members Daryl Hogan and Darren Keegan and pushed the band through a year long renaissance. Emerging with a new name and over an hour of recorded material in the winter of 2015, soon later the band teamed up with Dura Gesta Records, a subsidiary of Domestic Genocide Records, based in Michigan in the United States. This early trans-Atlantic relationship soon bore fruit, when Dura Gesta Records released Unkindness Of Ravens first album, ‘Under Stolen Skies’ available for worldwide mail-order.

Unkindness Of Ravens create a style of music that is melancholic and dramatic, while also heavy and sometimes hope filled and poignant. More than just a band, they have a story behind them – and a story to tell.

Coming from the tragically romantic wilds of rural Ireland, Unkindness Of Raven’s songs are often derived from elemental inspiration, with many references to nature and its dark side. The lyrics sometimes draw on the rich pool of ancient druidic and pre-Christian Irish mythology; while in a heartbeat later moving to songs inspired by the road, psychedelia, the hollow allure of distant streetlights, sexual desires and literary greats examining themes around existentialism and the theatre of the absurd. It is this curious blend of many elements that create the aesthetic of Unkindness Of Ravens, who write and record their music in a 200-year-old mountain lodge house, lost in the heart of the untamed and rugged Irish countryside – broadcasting it to the world like a faint transmission from the harsh and distant wilderness.

Living in an Ireland obsessed with its 100-year-old republican struggle and still emerging from the wreckage of the deathly grip once wielded upon the country by the now ailing Catholic Church – the band looks farther back in history and explores themes of mythology amid the traces of the heathen, celtic past that still exist today in Ireland. These themes, fused with rock, doom, stoner, classical, prog and space-rock styles of music, results in something new and as yet unheard and providing the listener with a multi-layered style of music which draws you back for repeated listens, where something new is discovered.

Traversing many different genres and styles and incorporating a large multitude of instruments, including ‘found sound’ and field recordings, the band have received national airplay on Irish radio shows dedicated to cutting edge experimental music and have received attention from people around the world attracted by their visual and musical portrayal of the duality of melancholy and beauty.