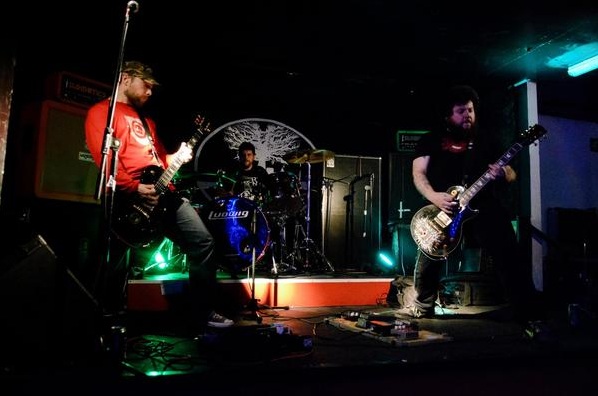 Hailing from Belfast, Northern Ireland, SLOMATICS were formed in late 2004 by Chris and Dave on guitars and Joe on drums and vocals, after rising from the ashes of their previous behemoth, er.. I mean band, THE NAUT. Joe had previously played bass for THE NAUT and had only began playing drums when the three started jamming. Yet within six months they had made their first release and were out touring under the SLOMATICS moniker. According to the ‘Kalceanna’ album sleeve, SLOMATICS are “middle-aged professionals by day, agro-sludge losers by night”.

The main thing to take note of when it comes to SLOMATICS is that they are a heavy as fuck Rock/Sludge/Doom power trio that don’t have a bass player. To make up for this absence they instead focus on steady rhythms and immensely heavy down-tuned riffs with various effects and distortion thrown into the mix. All combined to create an unmistakable dirty great racket that is all their own. And to be fair to them, it’s barely even noticeable that there’s no bassist. To date they have released two full-length albums, two split CDs, one split cassette, one split 12” vinyl and one split 7” vinyl.

Towards the end of 2011 Joe announced his departure from the band. And as of the end of November 2011 Marty, who played drums in THE NAUT has reconvened with Dave and Chris in SLOMATICS as their new drummer and. Marty will also continue playing drums for WAR IRON, the other spin-off band from THE NAUT.