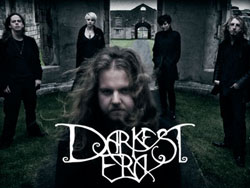 DARKEST ERA hardly need any introduction at this stage. They are by far the best export to come from our Island since MAEL MORDHA. Taking influence from the classic NWOBHM style bands and blending it with Celtic THIN LIZZY style twin-guitar while adding a solid epic feel to the whole thing. The closest comparison to their sound would have to be fellow Irish metal veterans OLD SEASON. The musicianship is superb from all parties involved. The guitar harmonies and interplay between Ade Mulgrew and Sarah Weighell shows how passionate they are about crafting their songs.

I was lucky enough to catch DARKEST ERA at their, ahem… ‘intimate evening gig’ they played in Cork last October. Local heroes I’LL EAT YOUR FACE were having their album launch the same night only over the road so the date clash certainly didn’t help matters. Plus it was the 3rd attempt by the band to play Cork. Nevertheless, they played an absolute blinder despite the disappointing turnout. After the gig I cornered Ade and David to ask about possibly adding their first NEMESIS demo here on the Archive, which they were quite happy to give me permission to do and even said I could throw up their first official DARKEST ERA demo ‘The Journey Through Damnation’ too. So happy days. Enjoy!

I’m not going to ramble on too much about them when there’s a perfectly good Band Biography on their own official site. Check it out here…  They’ve also released a ‘Promo Video’…

DARKEST ERA has developed a fresh Celtic Metal sound by fusing the twin guitar driven old school heavy metal styles of Thin Lizzy and Iron Maiden with the darker side of Irish folklore and mythology.

DARKEST ERA formed under the name ‘Nemesis’ in mid 2005. The band’s journey began when teenage school friends Ade Mulgrew and Sarah Wieghell began writing music together in early 2005. From the outset the duo’s writing took on a strong Celtic vibe. Vocalist Krum joined the fold and over the following year a collection of songs inspired by historical and mythological tales from ancient Ireland began to take shape.

They wrote their first song, ‘Battle of Cul Dreimne’ at their first full practice. The song had an unintentional Celtic leaning which was to permeate the band’s writing from then on. Originally taking influence from early Iron Maiden, Thin Lizzy and Irish folk music, their self titled demo, Nemesis, was released in mid 2006. A collection of raw, energetic and twin guitar driven songs, it began to bring the band to the attention of the European true metal underground.

The group’s fledgling sound continued to evolve quickly and in 2007 ‘Darkest Era’ was born. The new name was felt to be more in keeping with the darker and more epic sound that the band’s music had began to take on.Influences from doom, black, and pagan metal crept their way into the band and songs became darker with a more epic leaning.

In the winter of 2007, the band entered the studio to record their 4 song debut EP ‘The Journey Through Damnation’. In February 2008, a deal was signed with German label Eyes Like Snow, who produced a run of the EP and distributed it worldwide. The subsequent year saw the band step onto the international stage with hugely successful appearances at a number of European festivals including Fist Held High in Germany, Up the Hammers in Greece and Made in Hell in Italy.

In March 2010, the band announced a limited edition self released digi-pack entitled ‘The Oaks Sessions’. Containing 3 songs. It once again ignited the interest of the European underground with many new fans from Australia and North America racing to snap up a copy.

In August 2010, DARKEST ERA announced that they had signed a worldwide deal with Metal Blade Records, and wasted no time in entering the studio to record their highly anticipated debut album. They travelled to Foel Studios in Wales at the end of August to lay down 8 tracks of dark, stormy, epic Celtic Metal with producer Chris Fielding at the helm.

The result is ‘The Last Caress Of Light’, a record which mixes the melancholy and atmosphere of Irish Folk with the epic might of heavy metal bands such as Warlord, Iron Maiden and Thin Lizzy. The album stands out from all else as a record of intense emotional power and honesty; holding the listener within a dark heavy metal storm and not letting go until the last chords have rung out.

With a now Europe-wide reputation for their intense, ferocious and engaging live performances, and an original sound which draws fans from the pagan, folk and true metal genres, DARKEST ERA stand ready to bring their epic, Celtic metal to the world stage.

UK and European tours followed with bands including Alestorm, Arkona and Gloryhammer during 2012 and 2013, helping to further establish the band and its fresh Celtic Metal sound throughout Europe.