One of Dublin and indeed Ireland’s most punishing bands… SENZAR have emerged from the Pandemic with their debut full length album “Pyre Of Throes”.

It has been nearly four years since SENZAR announced themselves to the world with their brilliant “Untitled” EP and now it is time for the next chapter in their story to begin. The page has turned and revealed a new work of sinister secrets and unnerving darkness, a full length album that stands outside the comforting circle of firelight and holds out a hand in invitation, dares you to brave the unseen mysteries of the winter night and turn your back on all that you have known. “Pyre Of Throes” is vital and primal, magnificent and malicious, haunting and twisted, a torrent of ever evolving forms.SENZAR were formed in Dublin from the ashes of the acclaimed COLDWAR, who delivered an array of individual albums, from the fierce, punk-tinged death metal of “In The Suns Dead Rays” to the boundary exploring “Pantheist”. When COLDWAR’s race was run guitarist Paul Nash, vocalist Trevor McLave and drummer Marty McElhinney found themselves driven by a desire to go further into the unknown, to look deeper into the shadows and forging a new, dynamic course through increasingly tempestuous waters. With bassist Steven Anderson on board they set off down a new musical path, a road less travelled and SENZAR was born. With “Pyre Of Throes” this quartet have created an album that lures you deeper and deeper into its bewildering heart. Entrancing melodies work subtly within a carapace of black flame and steel while barbed hooks drag you down cobwebbed passages, always further from the comforting, the known and accepted. Each musical element of SENZAR works with a defiant freedom, an independent fire, each making a powerful, individual statement…and when they come together they blaze with a heat to consume worlds. 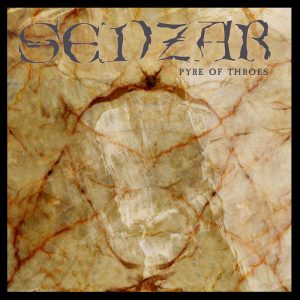 “Pyre Of Throes” is remarkable in every way, from its textured and intimidating sound, to its challenging visual presentation and staggering, multifaceted songs. An individual and powerful creation, a true achievement of vision and imagination. Released on March 21st, SENZAR’s debut full length album is a record that will impress and inspire as it brands its sigil indelibly onto the soul of all who hear its banshee cry.

Tattered fragments of the fabric of reality, we grasp for threads to draw us once more into the pattern. Drifting motes of light in the darkness, buffeted by the currents of air, fading sparks seeking only to dance our way back into the fire. In the spaces between the lines of the secret language, in the breaths between the syllables we glimpse the truth. Through word and ritual we reach for the final transformation; an inversion of miracles, a retracing of steps, an incineration of hypocrisies and a return to the heart. An ending of beginnings and an ending of endings, we cast the agonies of birth and death, the masks of deceit, into the flames of the pyre of throes…

The music of SENZAR stands on the outside, but not looking in – looking further into the distant reaches of the night. Their full length debut, “Pyre Of Throes”, follows on from their 2018 “Untitled” EP, wandering still further into an all consuming occult labyrinth of sound. The raw vocal invocations of Trevor McLave lead you onwards through starlit corridors and shadow shrouded chambers while malevolent melodies slip like cold knives beneath your skin. Intense, furious attacks burst open into grand frescoes of haunting twilight shades. Riffs bite and twist while full, rich bass tones wander a path all their own and everything locks, then drifts, then locks again. The lights of familiarity and complacency glimmer on a horizon that becomes ever more distant, then, one by one, flicker and die. In the cold embrace of songs like ‘Zenith’ and ‘The Sadness Will Last Forever’ you race under strange skies and mysteries unravel in your wake. Dissonant and alien, yet melodic and enticing the contradictions of SENZAR entwine to create a new unnerving harmony. This is a band that follows their own lonely path, preferring the unbroken snow beneath the leafless trees to the mud and rubble of the well trodden road.