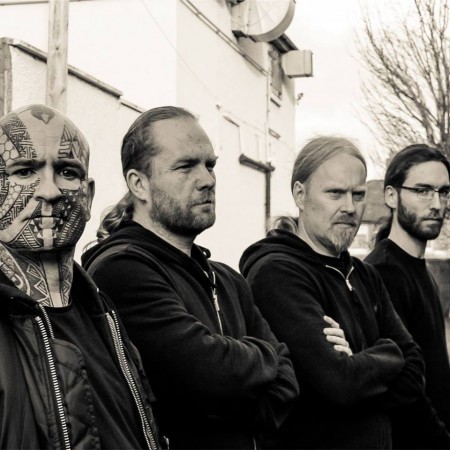 From the ashes of Dublin veterans Coldwar, Senzar have emerged, even more enraged and potent as before delving far into philosophies and marrying it with the raw energy of extreme metal.

Vocalist Trevor McLave explains that, “Inspiration behind the name derives out of numerous relating sources. The argument put forward in Ernst Cassirer’s essay on man, where he argues man is a symbolic animal being one. Senzar, as the mystery of the mystery language, whether this be mythological or not, is in my opinion, in itself a measurelessly potent idea for a name. With regards to Coldwar. That was a project with which the line-up varied over the years. It was consistently transforming. The later Coldwar was by all rights something other than what it had started as. Due to dynamics and politics from within the band it transpired the time was right to allow what was manifesting to become something within its own right. Which is exactly what it now is.”

The band will release their untitled debut record, an EP on 20th July 2018 via Hostile Media, and today have released the first taste of what’s the come.

McLave adds, “Not to be pedantic but, it’s not a self-titled release, it’s non-titled. We wanted to take our musical ideas a lot further than we were able to with Coldwar, elements of which were hinted at on Pantheist. Creating atmosphere and soundscapes which hold measureless potency, correlating with the lyrics and retaining raw energy and heaviness was our goal. Regarding the lyrics, I guess there are rudiments of consideration regarding mankind’s position in the greater scheme of the cosmos. Beyond that, it really is something purposely devised as being unfixed, thus open to beholders interpretation.”

Characteristically esoteric, Senzar are inspired by the relation of the human condition to the complexity and mystery of the cosmos. Motivated by the obscure yet intelligible patterns of order from chaos and our natural creative impulse, and being influenced by the darker, more challenging cultural output of modernity, they articulate a metaphysical engagement between the self and the natural world.

“The music is an endeavour to explore the unity and multiplicity of Being,” states vocalist Trevor McLave. “Both interpretive and descriptive, it explores beyond the scope of the rational gaze to disclose the world, which, understood as a totality of all things, we are embedded in, and fundamentally related to in ways which are mystical.”