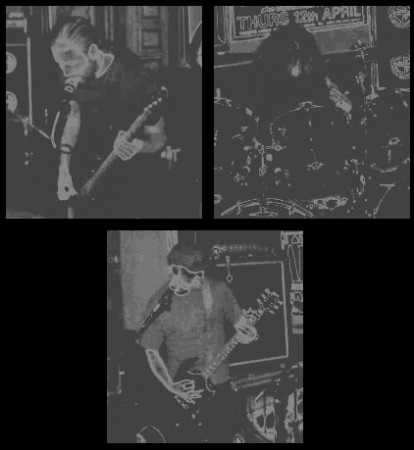 A huge thanks has to go out to Paul McCarroll and the rest of SCALD for allowing me to upload all their early demos and here to the Archive and for also allowing their first full-length album to be uploaded here also. I was really only chancing my arm when asking about adding their early demos. But to have them also allow me host their “Headworm” album is a massive bonus and I’m delighted to play this small part in the SCALD ‘Vermiverse’.

SCALD have been a relatively steady constant in the Irish Underground since 1993. Formed from the ashes of previous bands, CRISISTIANITY and T.V.P., by Paul McCarroll on drums, Pete Dempsey on guitar/vocals and Paul McCorry on bass. It was this line-up that recorded the track ‘Force The Farce’ at Belfast’s Dolphin Studios in September 1993 for inclusion on the “World Hardcore Compilation” released by Japanese label Discrete Records. And would follow it up exactly one year later with their  “Rancid Fuckhole” 1994 demo tape, recorded at the Warzone Centre, Belfast.

Soon after the original trio were joined on guitar by Mick Tierney, formerly of BLEEDING RECTUM. Despite being the main song writer for the band, Dempsey dropped his role of guitarist and concentrated on just vocals for the bands next release. The classic “Born With Teeth” demo from 1997. All five tracks from the previous “Rancid Fuckhole” demo were re-recorded along with three new cuts at the Warzone Centre, Belfast in August 1997.

McCorry left the band after the release of “Born With Teeth” so Dempsey, who had originally played guitar on the first demo, decided to now occupy the role of bassist along side vocal duties. There was also some label interest in the band around this point. They were meant to record again with their next release to come out through Shiver Records from Belgium, but after some time of being left in label limbo the band decided to move forward independently and recorded the double-barrelled assault of their “Nematoid” demos. “Nematoid: Specimen parts I-IV” was recorded in October 1999 and the following “Nematoid: Specimen parts V-IIX” in July 2000. Both were again recorded and mixed at Belfast’s Warzone Centre. An obvious change for the band which showed them progressing their sound with a much darker doom element, all the while retaining their trademark harshness and viciousness.

Come 2003 and SCALD finally make the step away from demo territory and record their first proper full-length album, “Headworm”. A milestone release in more ways than one, with the band incorporating ambient/atmospheric elements to parts of the album. At one moment your being lured into a false sense of security with subdued ambient intros and unexpected (somewhat)melodic or doom passages, only to be quickly jarred away with a burst of furious grind/crust and discordant death metal. Probably underrated by most, but for me personally “Headworm” is without a doubt one of the best releases to come out of the Irish Underground. It also includes an enhanced CD feature with band bio/info and accompanying album artwork courtesy of McCarroll’s ‘Unhinged Art’. An addition which goes hand in hand with the music and over time has become as much an aspect of the band as the music itself.

The band’s next release is their experimental 2006 opus, “Vermiculatus”.

“…SCALD’s most experimental, innovative and un-commercial project to date. The work consists of a singular album length instrumental track, the first section of which is performed by the band and is a complex composition of no repeated parts, followed by the closing section, which is an ambient reconstruction of the performance part.
This is accompanied on the CD by a short animated film (Vermiculatus B1) with a further reconstructed soundtrack. This is not a promotional video. Instead it is an integral facet to the work and concept as a whole. And is presented in a limited edition oversized 6 panel lavish digifolder packaging and artwork.”

The most recent SCALD output is their “Fluke EP” from 2007. Harking back to the bands Crust/Punk roots the music is the most visceral and raw that the band had been in years. Throw in the masterstroke of desecrating the earthly embodiment of Christ himself by stamping  the bands logo on a Eucharistic communion wafer and you have a truly unique slice of Extreme Irish Underground history.

Although the SCALD camp has been quiet over the last few years, and even though the band officially announce their disbanding in 2017… 2020 has seen the SCALD worm raise it’s head above the surface once more. Pete Dempsey had some rough demos of unfinished tracks he and Mick Tierney had made and after a chance meeting with Maciej Pasinski (qip), the pair clicked. The pair began working on and re-recording the unfinished tracks which are set to be released under the titled “REGIUS-I” in late 2020/early 2o21. Three tracks have already been released online with more to follow.