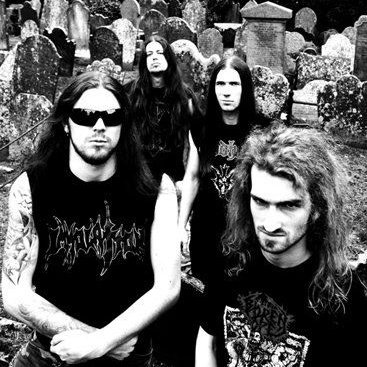 OVEROTH are a Death Metal Band hailing from the Belfast area of Northern Ireland. They formed in late 2005 by four friends with a raw passion for no frills Death Metal.

The band have been wreaking havoc across the Irish, UK and mainland Europe scenes since the release of their first demo ‘Pathway To Demise’ and as the focal point of the band’s existence, OVEROTH’s tight, energetic and exciting live performances have gained them the quick respect of the many bands they have shared the stage with including Bolt Thrower, Unleashed, Massacre, Napalm Death, Obituary, Hail Of Bullets, Cattle Decapitation, Sinister, Rotting Christ, Sodom and many more.

With good feedback and confidence from their demo release the band entered the studio again to record new material. Over the late spring of 2007 Overoth recorded ‘Death Personified’ at Komodo Studios. ‘Death Personified’ was released on 16th November 2007 instantly followed by a short tour of Ireland and the UK.

2010 saw the opening of a new chapter for Overoth, on 15th February the debut album ‘Kingdom of Shadows’ was released followed by multiple tours which took the band across UK/Eire & mainland Europe.

2013/2014 – The band are in the final stages of writing and are looking to record.
Watch this space!