The Distortion Project Presents the inaugural Metal 2 The Masses Competition In Northern Ireland. Offering the unique opportunity to send one band from Northern Ireland the chance to play the New Blood Stage at the 2015 Bloodstock Festival. The winner will also be in with a chance to play Wacken (Germany) and Metaldays (Slovenia) in 2016. Full details of the line-up below.

With only one more qualifying heat left in the Republic’s Bloodstock M2TM competition, our Northern Irish compatriots have now completed the third heat in their competition. Taking place in the Voodoo, Belfast on Thusday 12th March 2015, with OVEROTH, BALEFUL CREED, PROXIST and TOWERS all setting their sites on a semi-final slot.

Winning out on the night was the mighty Death Metallers OVEROTH with PROXIST coming in a close second place. Check out a full live review of the nights events over on PlanetMosh.com… (link here!!!)

Congratulations to both bands for getting through to the semi-final stages! The fourth heat of Bloodstock Metal 2 The Masses Northern Ireland will take place at Limelight 2 on Saturday April 4, with SINOCENCE, CONJURING FATE, SCIMITAR and BY CONQUEST OR CONSENT (replacing CEASELESS BLIGHT) all throwing their hats in the ring.

Two bands from the heat will qualify for the semi-finals. Judging will be 50% audience vote and 50% judges vote. Punters will be asked to award points to the bands in descending order. 4 points for their favourite performance, 3 points for their second favourite and so forth. So lets fill these shows with Metalheads and show Bloodstock what we got! Let battle commence!

Saturday 04th April
The Limelight 2, Belfast.
Doors 5pm.
Admission: £5.00. This will include one voting slip. 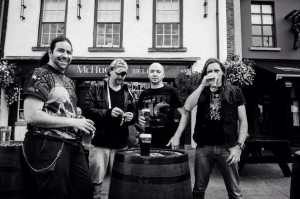 SINOCENCE
Sinocence are Ireland’s premier Metal act, based in Belfast, Northern Ireland. The band are working on part 2 of the ‘No Gods, No Masters’ trilogy. Vol 1 already being heralded as “Ambitious & Awesome!” 13 Years in and the band are as hungry as ever….This quick review of Vol 1 sums up the vibe that is in the band at present…..“A driving, wounded sound and really quite invigorating. The riffs are excellent and surprisingly detailed, with each one spanning at least two or three variational phrases before repeating, (a trait which seemed to die after Carcass). It’s an album of depth of feeling with great production and better songwriting.” Courtesy of Metal Ireland. 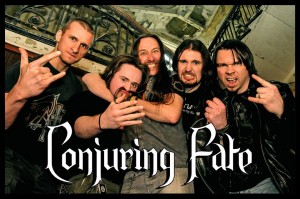 CONJURING FATE
Conjuring Fate are are a straight up Irish heavy metal band based in Co.Antrim. Drawing influences from Iron Maiden, Megadeth and Helloween amoung many others. They have played alongside acts such as BLAZE BAYLEY (ex Iron Maiden, Wolfsbane), PAT McMANUS (Mamas Boys), ARGUS, VOODOO SIX, SWEET SAVAGE etc. Since their reformation in 2015 they have released a music video (House On Haunted Hill) filmed on location at the Harland & Wolff drawing offices.The site where the infamous & ill fated liner the Titanic was designed & drawn up. CF are the first and possibly last band to do this.They have only just returned & have had a hugely successful cd launch and return to the live circuit. From Herman Li calling and asking CF to support DRAGONFORCE on the Irish leg of their tour, Ged Reynolds (Tyketto/Ten) RAGE OF ANGELS & bay area thrash legends MORDRED amoung others. 2015 sees CF embark on recording their 2nd cd and debut album! Watch this space… 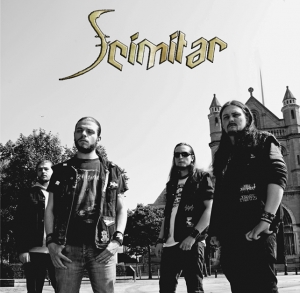 SCIMITAR
We are a Thrash Metal band from Belfast, Northern Ireland. Formed back in 2011, by 4 thrash lovers looking to cast a little violence on the scene. We continued to write music for about a year before playing are first gig in June 2012. Since then fans reaction and support has been beyond overwhelming, and continues to surprise us every time. Since then we have played some great support slots with some of the finest talent in Belfast and across the waters, which include : Exhumed, Gama Bomb, Arnocorps, Monarch!, Hatred, Putrefy, Psykosis, Hollowtruth, Rats Blood, War Iron, Rabid Bitch of The North plus many more. After building a very strong fan base that is ever growing, we have managed to put out two EPs titled ‘The Act of War’ and ‘Plague in the Vatican’ which was just released and we can guarantee it will brake your fucking neck!

BY CONQUEST OR CONSENT 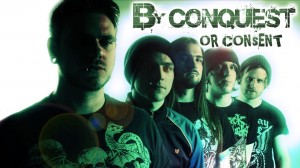 By Conquest Or Consent are a 5 piece metal band from Belfast N.I. With influences ranging from the the old school classics right up to Modern technical styles, BCOC waste no time in making a statement both musically and lyrically, bringing the brutality that packs a serious punch in the face. Together since 2010 and making a name for themselves on the Irish underground scene, BCOC have been playing shows up and down the country, getting to support international acts such as BlackBomb A, Sworn Amongst & Anthrax. Their first album: Empires, was released in July 2014 gaining praise from both crowds and critics.