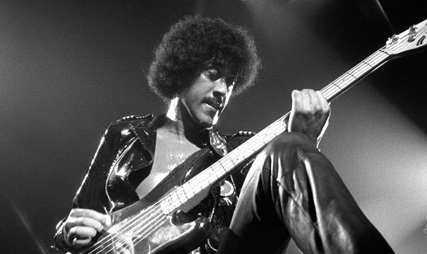 On March 27, 2015, as part of Universal Music Enterprises ‘Back To Black’ vinyl reissues campaign, eight albums from the THIN LIZZY catalog including their self-titled debut, Shades of a Blue Orphanage, Vagabonds of the Western World, Nightlife, Fighting, Jailbreak, Johnny The Fox, and Bad Reputation. Each album will be issued with its original artwork and is pressed on 180-gram vinyl for superior sound quality paying homage to the incredible musical legacy of one the most defining artists of the 20th century, THIN LIZZY.

Thin Lizzy (1971)
Led by bassist and vocalist Phil Lynott, along with guitarist Eric Bell and drummer Brian Downey, Thin Lizzy released their eponymous debut album in 1971. While the album shows the lighter side of Thin Lizzy with tracks such as Honesty Is No Excuse and Eire, it does feature a handful of upbeat rockers including Look at What The Wind Blew In, Ray-Gun and Remembering which showcases the harder sound to come.

Shades of a Blue Orphanage (1972)
Released in 1972, Shades of a Blue Orphanage is Thin Lizzy’s second studio album. The title of the record is a combination of the two previous band names of the members of Thin Lizzy, Shades of Blue and Orphanage, and features the ballad Sarah, written for Phil Lynott’s grandmother, the funky deep grooves of The Rise and Dear Demise of the Funky Nomadic Tribes and rockers such as Baby Face and Call the Police.

Vagabonds of the Western World (1973)
With the release of Thin Lizzy’s third studio album, 1973’s Vagabonds of the Western World, the band continued to refine their trademark hard-rock edge with tracks such as Gonna Creep Up on You, Mama Nature Said and The Rocker. This was also the last studio album to feature original guitarist Eric Bell and the first to feature the artwork of Irish artist Jim Fitzpatrick.

Nightlife (1974)
Thin Lizzy’s fourth studio album Nightlife was released in 1974 and was produced by Ron Nevison and Phil Lynott. It is the first album to feature new guitarists Scott Gorham and Brian Robertson who would introduce twin-guitar harmonies into the hard-rock format, playing a big role in Thin Lizzy’s sound and inspiring future rock bands to come. Included are the tracks Still in Love with You featuring guitarist Gary Moore, Showdown, and Philomena, a song written for Lynott’s mother.

Fighting (1975)
With the release of 1975’s Fighting, Thin Lizzy honed their signature style and sound with their own unique blend of harder-edged rock and rhythm and blues. The album was their first album to chart, hitting No. 60 in the U.K. and it set the stage for their commercial breakthrough, Jailbreak. It features the driving rhythms of tracks such as Suicide, their classic Bob Seger cover Rosalie, the Brian Robertson-penned track Silver Dollar, and Ballad of a Hard Man written by Scott Gorham.

Jailbreak (1976)
Released in 1976, Jailbreak was Thin Lizzy’s commercial breakthrough album, hitting Top 20 on The Billboard 200 album chart in the U.S. with the single The Boys Are Back in Town hitting No. 12 and Cowboy Song hitting No. 77 on The Billboard Hot 100. Other classics include the album’s title track, Emerald and the song Running Back which features Tim Hinkley on keyboards.

Johnny The Fox (1976)
Halfway through the Jailbreak tour, Phil Lynott fell ill and was pulled off the road. Johnny the Fox was written and recorded as Lynott recovered and was also released in 1976 hitting No. 11 on the U.K. charts. The album features additional drums by Phil Collins from Genesis and includes the U.K. hit single Don’t Believe a Word, which reached No.12 in Britain and No. 2 in Ireland, plus Rocky and Borderline.

Bad Reputation (1977)
In 1977 Thin Lizzy released their eighth studio album, Bad Reputation. Having missed most of the previous tour due to a temporary hand injury, this album would also end up being Brian Robertson’s last studio effort with the band and he is featured on only three of the albums nine tracks. Produced by Tony Visconti, the album has a much harder edge and includes the single Dancing in the Moonlight (It’s Caught Me in Its Spotlight), Dear Lord, featuring singer Mary Hopkins-Visconti on backing vocals, and the album’s title track and fan favorite Bad Reputation.

After the release of Thunder and Lightning the band embarked on their farewell tour. In January 1986, Phil Lynott passed away at age 36 and hard rock lost one its most iconic songwriting talents. Almost 30 years later, the amazing body of work THIN LIZZY left behind still retains all of its vibrancy and continues to influence generations and resonate with fans around the world.