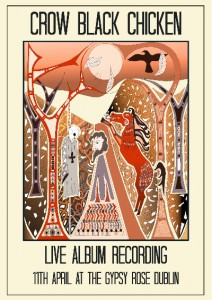 “We decided we liked it so much we’d give you nice folks the opportunity to download it. So just click over to our website to watch the video and you can download the track for free. And if you really feel like splashing out you can name your price and give us whatever price you think is fair for the track.

We did another version of John the Revelator on the night which we might have mixed soon so stay tuned.

Thanks again folks for listening and we’ll see y’all on the road soon.”
– Gev,Stephen and Christy…

CROW BLACK CHICKEN are also in the process of making their first live album, with the first show recordings from their recent gig at Bakers Bar in Clonmel, Tipperary already completed. Their next gig lined up to be recorded for the album will be in the Gypsy Rose, Dublin on the 11th April 2015. Tickets are available on the door for €10, but get in early as its sure to be a sell out.