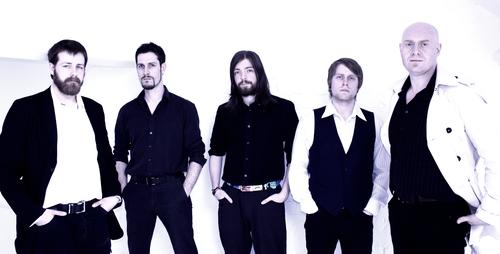 I’m going to cheat here, as there’s a perfectly good write up from Owen already online detailing the bands history better than I could! So here it is…

HEXXED are an extreme metal band based in Belfast, Northern Ireland. The band formed in 1996 when Owen Boden and Gerard Bentley jammed and played various cover song gigs in and around Castlewellan and Downpatrick, Co. Down, featuring numerous takes on SLAYER and SEPULTURA classics. In 1997 guitarist Ciarán Tracey responded to an advert posted in Belfast’s Doctor Roberts record store for more members to fill a permanent lineup. During the initial call Boden and Bentley played a version SLAYER’s ‘Mandatory Suicide’ in its entirety down the phone line. Though Tracey was playing with ABBATTOIR at the time, contact was maintained, and in 1999 he joined full time on guitar and vocal.

HEXXED’s material at this early stage took influence especially from MORBID ANGEL’s ‘Covenant’ – a sound which was to characterise the band for several years. The band also drew great inspiration from IMMOLATION’s ‘Failures For Gods’ and ANGELCORPSE’s ‘Inexorable’, two tonal references that can be heard throughout. The band gigged constantly around Northern Ireland before recording their first demo in 2000, ‘Perish The Sacred’, with producer Eamonn Keyes. The demo found favour with fans, and Sentinel Records lifted the track ‘Vitruvian’ to feature on the ‘In Unison’ collection of Irish underground acts. ‘Perish The Sacred’ was a more or less straightahead death metal outing in the classic Morbid Angel mould with tracks like ‘Nails That Pierce The Soul’ becoming live staples. Tensions within the band resulted in the departure of drummer Gerard Bentley, while bassist Gerard Richie also left to pursue other music.

The next stage of HEXXED’s sound began with the recruiting of drummer Niall Kelly and bassist Ryan Kinkead in 2001. The band relocated to the Belfast area and began writing new material that reflected sounds and feels that weren’t possible before. In particular, Kelly’s drumming enabled Tracey and Boden’s long term interest in CYNIC, DEATH and ATHIEST to come further to the surface. Thus the band moved to a darker, spacier tonality, which allowed atmospheric sections to go beside the faster blasting element. The four tracks which eventually made it onto ‘Transgression’ in 2003 were far advanced from the primal, militaristic death metal of the first CD and won critical acclaim in Ireland and beyond.

Upon its release the band played several shows in the UK, gigging in London’s The Verge club with SKALDIC CURSE, and Bradford’s famous (and now demolished) Empress. Elsewhere the band undertook numerous support slots including KATATONIA, SUFFOCATION, ZYKLON, DESASTER, as well as playing Irish festivals such as the Glenside Metal Meeting, Warzone Festival, and Day Of Darkness.

In 2004 the band accepted an invitation from Jon Hope at Midhir Records to compose two tracks for a limited edition coloured 7″ vinyl. The resulting songs were HEXXED’s darkest material to date. ‘Sub Liminal’ and ‘Where Gods Look Away’ saw the band push themselves creatively and personally to create two tracks over the space of a year in the studio, again with producer Keyes. Artwork was specially commissioned from Glyn Smyth (Scrawled). And BBC Northern Ireland’s “Across The Line” TV programme filmed a live video of the title track in Belfast’s Blackstaff Studios.

A period of inactivity followed. Bassist Ryan Kinkead was involved in a serious car crash and hence could not continue. Gerard Richie returned to fill in for several gigs. As a favour to a friend, the band did however record their last official release at Queens University, Belfast, for an exclusive web download in 2006. The track ‘Ground Down By Degrees’ continued in the vein of ‘Where Gods Look Away’, combining a more down to earth and raw feel with a simpler and more direct lyrical agenda. A new set of t-shirts and merchandise featuring artwork again from Glyn Smith accompanied it.

‘The Synapse Collision’ is the product of coincidences and occurrences. The album’s inception came about after a frantic telepathic jam between drummer Niall Kelly and guitarist Owen Boden – this following the departure of long time member Ciarán Tracey and bassist Gerard Richie. This condensed variant of the band was allowed a new creative freedom, the music became rawer, more naturally complex and poly-rhythmical in nature. Those early jams formed the basis of ‘The Synapse Collision’.

Soon after, Ryan Gorman joined HEXXED on bass. Gorman’s unorthodox playing introduced new rhythmic possibilities for the band. HEXXED then settlled in to a two year period of experimentation and development. Some aspects of the previous HEXXED sound were dropped in favour of new musical concepts such as improvisation, sound manipulation and new instrumentation. Despite the huge steps the band were making musically many of the original core concepts remained i.e. conviction, honesty and progressive ideals coupled with musical sensibility. After a two year period, which saw the band deconstruct and rebuild their sound, HEXXED decided to record. Enthused by the recent creativity HEXXED decided to record their output independently, a first for the band. Long days of carpentry, ear bleed and strong coffee followed. In various locations the percussion, guitars and bass were recorded over a 24 month period.

Boden then began to turn his focus to the lyrics. After exploring renunciation of traditional belief systems (that marked most of the bands earlier lyrical agenda) it was decided to move the focus toward the narrowing gap between science and the occult. Following a six month period of lyric writing Boden decided to enlist Steve McCann to help with vocal phrasing and to act as a sounding board for the lyrical concept. In addition to vocals duties McCann became the second guitarist for the band. Around this time HEXXED teamed up with Jack Ledwith who would not only record all vocals but also mix and master ‘The Synapse Collision’. Vocal recording was carried out at Queens Uni, tirelessly, into many a long night by Jack. Although happy with the vocal output the band decided to further raise the bar and recruit Marty Byrne, the fifth and final member of Hexxed. Byrne was able to push The Synapse into new worlds with his distinctive clean harmonies and his scathing heavy vocal. With a triple vocal attack in the bag, HEXXED spent an enjoyable but tortuous five months mixing and mastering… and then remixing and remastering.

In parallel with ‘the pain’ the band asked Glyn Smyth (Scrawled) to complete artwork for the album. Glyn’s work is rich in symbology and many strands link directly to the music and lyrics. Indeed within the entire package and for those with eyes to see and ears to hear, there is much for the keen observer to study. The 2010 album ‘The Synapse Collision’ has been created as a single piece of music. The intention is that it be listened to in full, in standard play order. Despite being created as a single piece we have inserted track markers to distinguish various chapters and to allow the deeper lyrical concept to develop naturally.