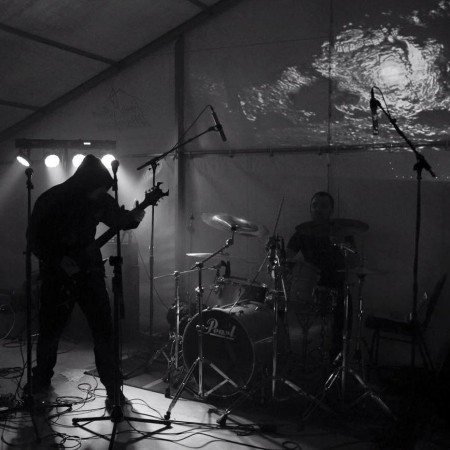 GOURD are an audio/visual experimental metal duo, taking influence from a wide variety of styles in the extreme underground. Combining elements of harsh noise, doom metal, and dark ambient through an industrial prism to create an unhinged nightmare of sound. A crushing, claustrophobic, extremely unique, if somewhat challenging, listening experience.

It’s members are Ray Keenehan (BACTERIUM, WRECK OF THE HESPERUS, BENEATH THE SOD, SIX DOWN, CREED, FANG, SIGOURNEY) and Hick (ON PAIN OF DEATH, SHERMAN M4, PILGRIMAGE). Style-wise it’s not a million miles away from the members primary bands mentioned above. All the bands music videos have been posted up on Youtube and were put together and edited by Keenehan.

They first recorded ‘The Beaten Path’ in mid-August 2014 with John Moffatt at Oaks Recording Studios in Enniskillen, with A near twenty minute doomed out beast of a track. This first offering was then followed up in 2015 with ‘That Despicable Thing, The Human Heart’, and in 2016 with ‘Gaunt’, ‘Subliminal Subterranean Submergence’ and ‘That Despicable Thing, The Human Heart II’. All four of which have been released as the bands debut “GOURD EP” in late August 2016. The following year they partnered up with LUXURY MOLLUSC to release a split tape on Cursed Monk Records. 2019 saw the band release the “Moldering Aberrations” EP. And finally in 2020 they are set to unleash their debut full length “The Emptied Wastes”.