By Any Means Hardcore / Co. Antrim 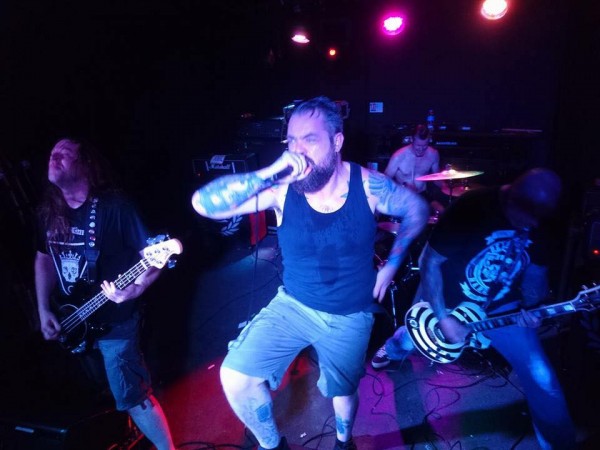 BY ANY MEANS are a 4-piece Hardcore outfit from Belfast. First formed in mid-2009, the band features members of previous band such as HAND OF DEATH,  DISSENT, D.S.F.A., 2000 STRONG and FREEBASE. And taking their queue from veteran hardcore bands like MADBALL, TERROR, SICK OF IT ALL and AGNOSTIC FRONT, it’s clear what you’re letting yourself in for as regards sound and style.

The original line-up was Dave Lyness (bass), Paul Anthony (guitar), Dave Byers (drums) and Micky Higgins (vocals). It wasn’t long before the band were ready to launch head first into demoing tracks! And come November of that year they were in Komodo Studios with Alwyn Walker, who actually joined the band for a few months, to record their debut “By Any Means” EP. Mixing equal parts Hardcore and Metal, the EP showcased the bands intentions perfectly and was very well received on it’s release in both Ireland and the UK. Four tracks were recorded specifically for this release along with a number of other rough demos, one of which was included as a bonus track on the early 2010 CD release.

Later on in 2010 saw the band re-shuffling their ranks. Alwyn Walker was no longer in the band and by mid-2011 Mickey Higgins also opted to leave the band too. This lead to Dave Lyness moving from bass duties and stepping up to the mic with Chris McDowell being enlisted as the bands new bassist. Cut back to a 4-piece yet again BAM quickly refined their sound around this new line-up arrangement, playing gigs wherever and whenever possible. And in August 2011 they began recording for their debut full length release in Einstein Studios, Antrim with Frankie McClay. “Built On Respect” was released the following November through the newly established Belfast based label, Savour Your Scene Records.

As a result of being stripped back to one guitarist, “Built On Respect” is a much more straight forward Hardcore sounding release than the previous EP. With most of the earlier EP and demo tracks being re-recorded for the album, the difference in the overall sound is notable. And along with a swathe of brand new tracks, such as ‘Mercury Rising’ which begins in a burst of hardcore fury before settling into a mid-section built around a chunky riff and the quick-fire attack of title track, ‘Built On Respect’ , it’s a relentless album from beginning to end that is chock full of heavy, aggressive riffs that embody the traditional hardcore ethic to a tee. Dave Lyness’ rough and aggressive vocal style is very much suited to the more straight-up hardcore approach. But it’s his unrestrained and uncompromising deliveries, such as during the closing salvo of ‘Misanthropy (Reprise)’ and ‘A Declaration  Of War’, that really impress. You can almost envisage a bloody spray from his shredded throat as he bellows out the closing lines.

BY ANY MEANS have also posted the tracks from their upcoming new live “The Bearcat Sessions” EP, which was recorded at Bearcat Belfast and is due to be released in late 2014/early 2015. More line-up problems hit the band again in November 2014 when Chris Curlett announced he had to step down from the bands vocalist position due to ongoing health issues with his heart.But not ones to get stopped in their tracks, the band has enlisted former CHOSEN and TWO TALES OF WOE vocalist Carl King to fill in for the bands live commitments in early 2015, including support to the mighty SICK OF IT ALL in Dublin and Belfast on the 1st and 2nd February.