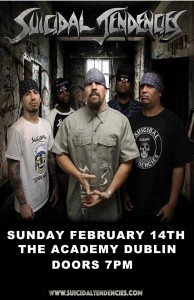 Valentine’s night this year is something that will live in many a people’s memory. Meals with loved ones, long romantic walks… But for many more it will always be remembered for the night that SUICIDAL TENDENCIES played here for the first time in 14 years…

Northern Ireland natives BY ANY MEANS started of tonight’s proceedings to a very empty Academy and it was a shame. The finest hardcore band North and South of Ireland have to offer play a killer of set. Vocalist Paul Docs is on top form, his vocals are war inducing and he tries his best to get the crowd involved, even joins those lucky enough to catch their set in the audience area……. This was a battle for these guys to play to an empty venue while many were drinking in the local pubs. They missed THE best set I’ve ever seen these guys play. Astonishing set from an amazing band.

14 years since the Cyco one from Venice, L.A last graced a stage here. With the venue already heaving with people eager to witness the band who sang about how we felt- and still do- with the lights down and the intro to what is a popular opening track for thousands of their fans, Mike Muir bursts into the stage and asks “Dublin! What the hell is going on around here” 14 years we waited to hear You can’t bring me down and the place erupts with joy as the pit opens up and stays open for the night. Cyco Miko is in his stage stalking mode. How this guy can keep moving is beyond me, hit after hit after hit saw the crowd begging for more. ‘I Saw Your Mommy’, ‘Two Sided Politics’, ‘I Shot The Devil’, ‘How Will I Laugh…’. The crowd lap it up, every movement, every chord, every word and in turn the band play their hearts out. With a quick speech Mike promises us that ST will return again real soon and it’s then straight back into business. ‘Send Me Your Money’ has the pit sort of waltzing into a mosh and it was great to see smiles on everyone’s faces throughout the venue. It’s too soon for us all when the first of the encores comes along in ‘Possessed To Skate’ and they go straight into a ‘Pledge Your Allegiance’ which saw every mouth singing , every fist in the air for the outro. The song that put us here tonight is up next and it’s hard to find words to describe what it is like to finally hear ‘Institutionalized’ live after all these years. It sees the band tearing through it, the pit going berserk and all those in attendance singing every word. To say we left with a smile would be an understatement,we left black and blue and our voices gone. The joy of seeing people actually standing in a queue for ST merch goes to show you that this band has and will always be here…..