It’s official… Two of the BIG FOUR are teaming up for couple of Irish dates this Summer.

The rumour mill nearly flew off it’s hinges over the last 24hrs, with talk of the two thrash titans hitting our shores.
A Dublin show in the Olympia Theatre on Tuesday June 14th was confirmed first thing this morning. And now it has also been confirmed that both SLAYER and ANTHRAX will now be playing in Cork the following night, June 15th, as part of the “Live At The Marquee” festival. 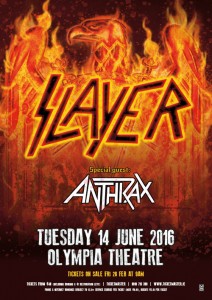 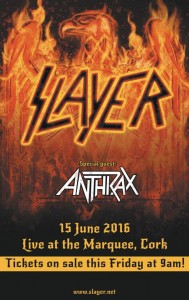 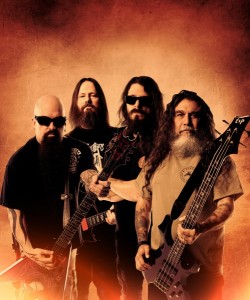 Thirty-four years into its career, Slayer remains the preeminent punk-thrash band that helped establish the genre and that up-and-coming metal heads continue to revere and emulate. Slayer is a five-time nominated, two-time Grammy Award-winning metal juggernaut that writes songs which mirror the turmoil and aberrations of society. Repentless, the band’s first new album in six years, continues the Slaytanic offensive with a twelve-song, blood-shaking sonic attack. The 12th studio album from the iconic thrash/metal band and the first without beloved founding member Jeff Hanneman, made the highest Billboard debut in the band’s 30+ year recording career, coming in at #4 on the Top 200 Album Charts.

Repentless is dark, fast, aggressive and without mercy. It was also the most challenging record Slayer has ever had to make. Repentless marks a number of transitions for the band, but with their undisputed attitude, Slayer emerges triumphant, says Tom. “After 35 years, the thing that Kerry and I share is our dedication to the band, and Jeff’s included in that. It’s the same with Gary. He’s been doing this a long time and he’s had the same commitment. It’s a common bond we share with a lot of musicians out there. I’m really excited about the new album, we’ve put a lot of work into it, Kerry especially, and it was all for Slayer.” 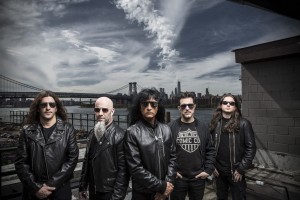 ANTHRAX isn’t your average band! Formed in New York in 1981, the group that would go on to sell over ten million records and become the living embodiment of America’s hi-top wearing, riff-spitting, ear-thrashing answer to the New Wave Of British Heavy Metal has undergone not one, but two complete eras – but that isn’t their real achievement.

ANTHRAX celebrate its 35th anniversary as a band with the release of one of the year’s most-anticipated metal/thrash albums, For All Kings, due out February 26. Over its 35-year career, Anthrax has been a pioneering band with its unique style, sound and heavy brand of thrash metal, and, as Metallica’s Kirk Hammett put it, “one can hear their influence on any number of up and coming bands.” Anthrax has sold in excess of 10-million units, received multiple Gold and Platinum certifications, six Grammy nominations and a host of other accolades from the media, industry and fans.