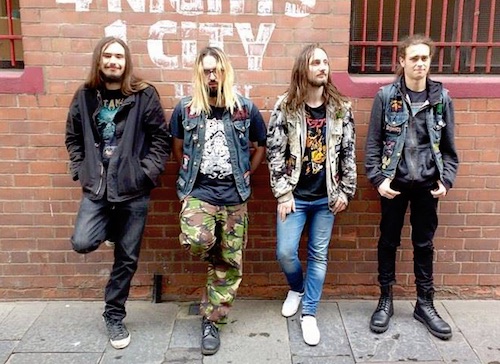 As far as I can tell ACID AGE has links origin’s back around 2010 as a band called AFFLICTION, who would eventually change their name to 4 MUTANT HILLBILLIES, before officially evolving into ACID AGE in early 2013!

The track ‘Anak Durhaka’ was originally recorded by 4MH and was available for a time on their old Myspace page. The track eventually found it’s way on the 2013 ACID AGE album “Enter The Zomborg”.

ACID AGE are a Hyper Thrash band from Northern Ireland influenced by various Thrash, Punk and New Wave of British Heavy Metal bands. The band consists of Eddie Cross on vocals, Jude McIlwaine on guitar, Jake Martin on bass and Luke Tolcher on drums. Though their style is heavily rooted in the typical thrash of the 1980’s they do however mix in elements of the New Wave of British Heavy Metal (N.W.O.B.H.M) movement, hardcore punk and even 1950’s Rock ‘n Roll. They call their style “Hyper Thrash” because it is a reflection of their hyper-active stage antics and furiously fast musical style. ACID AGE have played with many notable acts including GAMA BOMB, THE DANGERFIELDS, PUTREFY and COILGUNS.

Formed on the 7th of January 2013 by vocalist and guitarist Jude McIlwaine, ACID AGE originally took place as a solo recording project (recording one EP titled “Cyborg Thrashterpiece”) until the addition of drummer Jason Harkness later in the month. By February 2013 ACID AGE were a full band adding bass virtuoso Jake Martin. After a raise in interest on the internet as a result of “Cyborg Thrashterpiece” EP, ACID AGE were quickly signed to Northern Irish based label, “Punkerama Records” (Home to the likes of THE DEFECTS, PARANOID VISIONS and THE UK SUBS). ACID AGE‘s debut album, “Enter the Zomborg”, was released via CD and Digital Download in November 2013 and features guest appearances from John Roche (guitarist from GAMA BOMB and Tony Portaro (lead vocalist and guitarist from WHIPLASH. This gave ACID AGE a huge jump forward and has proved to be an iconic achievement as no other thrash metal band has ever had two internationally recognized musicians perform on a debut album. “Enter the Zomborg” was reissued by South Korean based label “Tachycardia Records” on the 24th of February 2014 featuring 3 bonus tracks from Acid Age’s home recorded “THE TROMA-TIZED E.P” (Which was a self released EP ACID AGE had previously put out as a tribute to the New Jersey based independent film company “TROMA”.

ACID AGE announced on December 25th (Yes! Christmas day) 2013 that they were intending to go back into the studio to work on the follow-up to “Enter The Zomborg”. Luke Tolcher replaced Jason Harkness as the bands drummer in June 2014. And on the 14th of November 2014, “Drone Shark Ethics” was released was released via WITCHES BREW RECORDS (Who worked with bands like TOXIC HOLOCAUST, GAMA BOMB and AMOK), and features more guest appearances including Felix Griffin (Ex-D.R.I and BAT).

In November 2014 just after the release of “Drone Shark Ethics”, it was announced that Jude would be stepping down from vocal duties to enjoy playing guitar more. Eddie J. Cross, who also plays guitar in WARDOMIZED with Luke Tolcher, stepped in making ACID AGE a four piece band