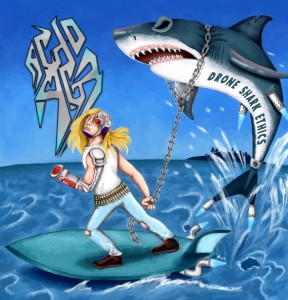 Some bands like to explore the vast universe of music that’s available to them. Dipping in to experiment with many different genres and pulling influences from a wide range of different styles in order to invent, construct, and create complex new genres of their own. Other bands, however, would much rather take a stable and time tested formula and play it even faster than those who originally defined it. ACID AGE are proud to be amongst the latter category, taking some of the best characteristics associated with Thrash Metal and playing them at breakneck speeds.

“Drone Shark Ethics” is the latest helping from the Belfast based quartet. This sees the band continue their crusade to outrun all rival Thrash bands with their personalized take on the genre, which they refer to as “Hyper Thrash”. Beginning with a 73 second instrumental introduction called ‘Knight of The Living Shred’, the record takes off at full speed making it evident from the opening note that it’s starting as it means to go on. This is quickly followed by ‘F.T.P.L. (Fuck The Poor Legislation)’, which lets lead singer, Jude McIlwaine (who has since stepped aside to concentrate fully on guitars, with Eddie Cross joining on vocals), join his band-mates in their all-out sonic assault as he spits short and deliberate sentences with a Hardcore Punk bite. The chorus then sees him flex his vocal chords with high pitched screams that are reminiscent of GAMA BOMB’s ‘Zombie Creeping Flesh’, and a flurry of low pitched growls with a Death Metal twang.

There are some stand-out moments on this album which really show that there’s still a hell of a lot of life left in the Thrash Metal genre. For example the title track, ‘Drone Shark Ethics’, boasts a razor sharp riff during its verse, coupled with a punchy vocal line that falls into place perfectly with Luke Tolcher’s drumming to create a hugely S.O.D. inspired sound. When it breaks into its melodic chorus, it’s quite simply a perfect piece of classic Thrash, giving the listener just enough time to catch their breath before launching headlong into another high octane verse. ‘50,000 Robot Archers’ provides another one of the record’s great highlights. The song opens with a steady build up featuring a strong rhythmic passage from lead guitarist, Jude McIlwaine, with an impressive tail before the blast beat sweeps the riff away on a sea of energy. The solo here takes the band to new heights with a beautiful guitar sound which leaves you wanting more. Luckily, there is more. An expertly constructed lick rips through the speakers carrying the track along with it towards its climax. As the band increase the tempo even further, McIlwaine responds in kind by doubling the speed of the riff to keep up; ultimately creating a fantastic musical explosion. It’s as intense as it powerful, and it really shows what this band is capable of. 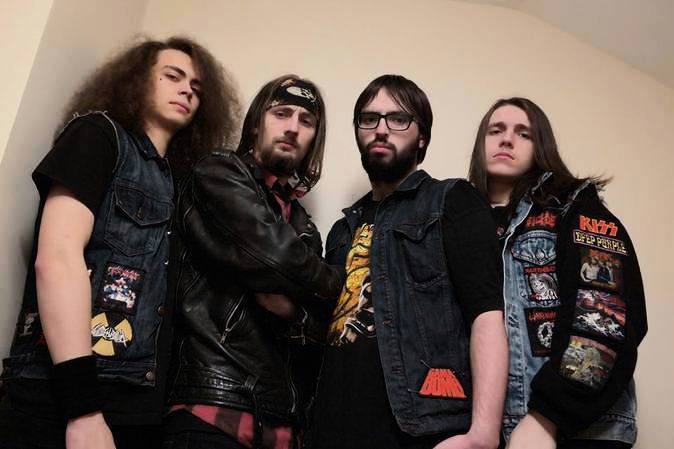 There are brief moments when ACID AGE attempt to slow down to a reasonable pace. After a constant barrage of full speed riffs, it can start to sound a little bit like a freeway. These slight changes are welcome and really add to the record over all. Bassist, Jake Martin, gets a chance to let loose during a breakdown in ‘Woman with No W’. Here he delivers a string of punches which create a great sense of anticipation, forcing the listener’s head to nod along. It feels like a slow beating, keeping you in check and demanding your attention with every note. Another moment when they slightly steer away from the formula can be heard in ‘No Place to Skate’. Here, the Northern Irish Hyper Thrash outfit swing more towards a straight Punk sound as their lyrics describe how skaters are left unaccommodated for in Belfast City. The elongated chorus and solid solo break show that ACID AGE are not just a one trick pony.

This record is built for speed, and in that sense it really delivers. It’s fast, energetic and fun. It doesn’t need anything else. You can clearly hear that the Belfast boys are enjoying the adrenaline filled high provided by their homemade brew of Thrash Metal, and songs like ‘Drone Shark Ethics’ and ‘Fall on Your Sword’ have a huge amount of potential to become instant classics on the live circuit. However!!! It seems unfortunate that the album’s production just can’t hold the weight of the music therein. The recording just isn’t as tight as it needs to be, leaving a loose and occasionally off-time sound. This occurs throughout many of the thirteen tracks, but is most evident when the band tries to play as fast as possible. It can often sound like a race between the instruments, instead of them working together as a unit. On ‘Woman with No W’ for example, McIlwaine fights to stay in time during the chorus, and ‘Fall on Your Sword’ sees the doubled up vocals falling out of sync with one another. Having said that, bringing in WORDOMIZED‘s Eddie Cross on vocals should certainly improve all this. “Drone Shark Ethics” is still an incredible youth fuelled rush of Metal. If NUCLEAR ASSAULT and MUNICIPAL WASTE let GAMA BOMB babysit their child… ACID AGE’s sound would surely be the result.