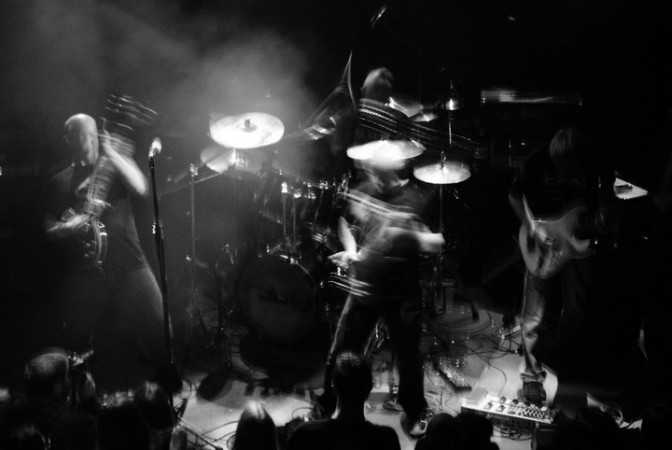 PARHELIA are group from Dublin who play instrumental music which lies somewhere between post/prog rock and metal. The most active version of the band (2006-2009) consisted of 4 members, currently Greg Clarke & Cathal Rogers remain.

After the demise of their previous band Revile, Parhelia hit the ground running recording an EP between December 05 and January 06. Whilst the EP was being pressed the band undertook several gigs to prepare for the records release including an acoustic performance with Belfast’s Winding Stair. The EP “First Light “was released in April, and Parhelia began touring the EP in earnest, starting with Irish dates alongside Involution (Belfast) & Inchi (Norway), the band then departed for Norway where they played a mixture of acoustic and electric performances, made an appearance on Norwegian Television and finished the trip off with a support slot to Trail of Tears. The band also managed to find time on the trip to record an acoustic EP which was shelved for a later release. Upon their return the band kept the momentum going, supporting Bill Steer’s Firebird, playing a West Memphis 3 awareness concert and making an appearance supporting Guns N’ Roses and Therapy? Amongst others on the Dublin version of the Download festival. Parhelia continued to gig consistently for the rest of the year, taking short breaks here and there to work on material written for their second EP, they rounded out 2006 supporting and arranging a gig for Austria’s Dead Soul Tribe in Dublin. First light was very favorably received by press and remains the bands best selling release with 1,000 + copies sold.

Parhelia sought to begin 2007 in the same fashion, again recording an EP between December and January with Neal Calderwood at Manor Park Studios. The resulting Oceans Apart was a more ambitious effort, with longer songs and more complex structures. February saw Parhelia support 65 Days of Static at a sold-out show in Dublin but after that momentum stalled. The band found it increasingly difficult to find gigs once the EP was made available in March, on reflection it was probably time to cast the net beyond Ireland and tour abroad, however they opted to continue to play locally often lower down on multiple band bills to diminishing returns. By July apathy, internal and external personal issues had risen to the fore and after months of gigging to smaller crowds they called it quits after playing to a packed Katy Daly’s Belfast in support of Stand-up Guy who were releasing their second album Avenue Unawares.

The band didn’t contact each other for several months, however after some time Greg and Cathal began casually rehearsing and writing material which would eventually form the basis of their next record. An offer of supporting USA’s Cougar led the band to invite Andy and Diarmuid to rejoin, the latter declined citing plans to emigrate and diminished interest in being active in a band. Parhelia performed alongside Cougar as a three piece in November after which they put plans together to record an album and recruit a guitarist. In 2008 Philip Clarke joined on guitars, after a few months rehearsing and writing Parhelia took in three dates around Ireland with Control Freak to break the new guitarist in. After the shows, Parhelia issued their Acoustic EP, recorded two years prior in Norway hoping to raise funds necessary to record the album.  The rest of the year was spent finishing the record with the band entering the studio that December to record.

The album, Shifting Sands was completed that January and pressed in time to support God Is an Astronaut and then Anathema on each of the bands Irish tours. Parhelia rounded out the year playing limited headline slots and writing more material.

Though there were several shows and some recording planned in 2010 they were scrapped early in the year to personal differences within the camp. They regrouped briefly over the summer and played support to Sweden’s Katatonia at a show in Dublin. The reunion was to be short lived however with the same issues arising again and to this date, the show with Katatonia remains the band’s last full live performance.

2011 saw Cathal, Philip and Greg combine to prepare material for a second album. Although the sessions proved fruitful, the lack of a drummer hindered progress. The band surfaced briefly toward the end of 2011 to play a semi acoustic show at the now closed Into the Void Records. 2012 was largely spent trying to recruit a drummer with all options explored, and the band began an auditioning process and entertaining session musicians simultaneously, at the end of the year, completely frustrated by the lack of any real progress made the band committed to completing, recording and releasing the album the following year. In March 2013, Parhelia recorded The Precipice of Change. The record was partially recorded at Greg and Cathal’s home studios, with guitars, bass mixing conducted with Neal Calderwood at Manor Park. The album was released and sold solely through their website in August 2013 and no touring was done to support it.

Currently Greg and Cathal are working on a new Parhelia album, as of the time of writing  tracking has begun but no release date has been made available.