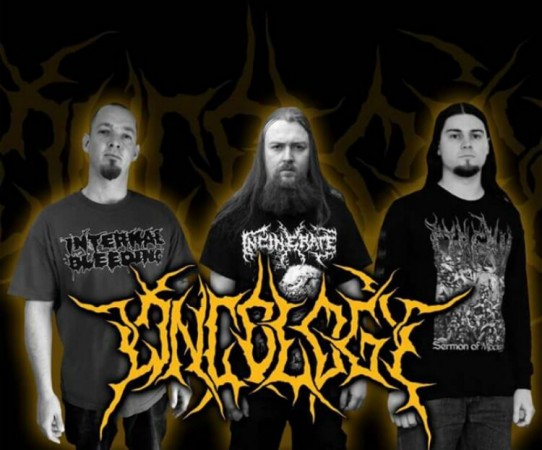 Brutal Death Metal from Coleraine in Northern Ireland. The band was founded by Connor Brown and Aaron Rankin and was originally intended to serve as a side project from their previous band PUTREFY. But after that bands line-up collapsed in 2014, Brown and Rankin, along with fellow PUTREFY bassist Ross Duffy, decided to make ONCOLOGY their full time band.

They released a demo track called ‘Prelude To Oblivion’ in late 2014 as means of trying to attract a full-time drummer and vocalist. And followed this up with an official three track demo titled “The Metastasis” in early 2015. All of which featured Brown on vocals and programmed drums. They also released a free download track of the band covering SUFFOCATION’s “Infecting The Crypts” with drummer Eddie Z. and former SINISTER DEMISE vocalist Frank Calwell joining the line-up as guests.

ONCOLOGY also secured a record deal with Rising Nemesis Records for the release of their first full length album, “Infinite Regress” in 2016.

“Rising Nemesis Records has snagged one of the most promising brutal death metal bands from the UK – Oncology . After stunning everyone with a vicious, lethal and thoroughly intense debut EP release titled ‘The Metastasis’, ONCOLOGY are now poised to take things to another level, having signed a contract with us to release their full length album. In all departments the band excel, with their precision, blinding speed and slick brutality. These guys are going to leave an indelible mark and will set a trail of fire in this category.”