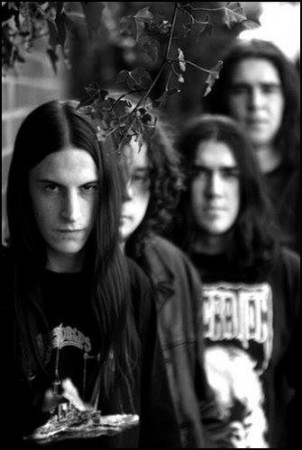 Originally formed in 2004, Sorrowfall reformed in 2015 with the original line-up of Poley, Eddie, Chris and Sleeve.

Sorrowfall was formed in April 2004 by childhood friends Chris Collins and Steve Reynolds, after they became disillusioned with the band that they were playing in at the time. Deciding to focus their efforts on something that was a bit more serious the pair broke away and started writing original material of their own and also began looking for new band members who shared their ambitions and taste in music. They didn’t have to look too far, within a couple of weeks Conor Edgar and Chris Polin were recruited on drums and lead guitar respectively. Both fitted in perfectly and with the line up complete the band plunged headlong into writing and performing, their first gig being in the Rosetta Bar in Belfast in August 2004.

The band recorded their first demo “Welcome To The Killing Floor” during the summer of 2004 in a friends garage but it was the follow up, 2005’s “Insanity’s Memoirs” which really heralded the arrival of the band on the Irish metal scene and gained them a massive amount of respect and kudos among their peers. Between 2005 and 2006 “Sorrowfall” gigged consistently up and down the country as well as making an appearance at Ireland’s premier metal festival “Day of Darkness” in the summer of 2006.

In the summer of 2007 “Sorrowfall” teamed up with the Ossia School of Music to produce their debut full length album. The album was entitled “Prayers Of The Faithless” and was recorded over three weeks in Best Cellars Studio and produced by Davey McCullough. “Prayers Of The Faithless” gained rave reviews for the band both at home and further afield. The rest of 2007 was spent gigging up and down Ireland once more including appearances at the “Sligo Whiplash” and “Cork Winterfest” Festivals. In February 2008 the band went on hiatus during which time they teamed up with Irish underground legend Sam Best to bring his one man black metal project “Chambercraft” to the live stage. The next six months was spent honing the “Chambercraft” live set and in July 2008 the band once again played the “Day Of Darkness Festival” this time as live session musicians for “Chambercraft” to a rapturous response from the crowd.

In September 2008 “Sorrowfall” piled into a mini van along with good friends Stevie Wright, Corey Barkley and “Leather” Mike Legge and hit the road on a tour of mainland UK where they were very well received. In February 2009 “Sorrowfall” were on the move again teaming up with Belgian band “Thurisaz” they played a couple of dates in Belgium including the “Frontline Festival” in Gent. It was during this trip that frontman Steve Reynolds decided that after five years his heart was no longer in “Sorrowfall” and citing growing musical and creative differences and a desire not to ruin lifelong friendships he decided to call it quits with the band. Steve’s last performance was in April 2009 at the “Full Metal Racket Festival” in the Mandela Hall at Queens in Belfast.

Shortly after Steve’s departure Sam Best was recruited as his full time replacement. But the band eventually slipped back into inactivity. But SORROWFALL once again reformed in 2015 with the original line-up of Poley, Eddie, Chris and Sleeve.