INVICTUS PRODUCTIONS has been solid fixture on the Irish and indeed the World’s underground metal scene for almost twenty years now, with it’s “18 Years of Persistence Anniversary Party” taking place on the 11th February 2017. Helmed by the enigmatic Darragh O’Leary, the label and the man has never wavered or faltered in delivering wave after wave of undiluted death metal to hungry fans. Recent years has seen a noticeable uptake in the labels output of home-grown talent with the likes of ZOM and MALTHUSIAN both making their marks on the European death metal scene and making huge strides in thelive circuits as well. Then last year saw COSCRADH joining the Invictus fold. And now! Even though still in the early stages of 2017, Invictus Productions is set to deliver a vicious double salvo of Irish blackened death with two highly anticipated and formidable releases from both NADDRED and APOSTATE VIATICUM. 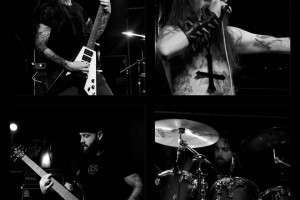 “INVICTUS PRODUCTIONS is proud to present NADDRED‘s debut demo, “Sluagh”, on cassette tape. A new Irish entity featuring members of SLIDHR and ETERNAL HELCARAXE and former members of SOL AXIS. NADDRED are truly a summation of their combined experience in the black metal trenches. Across the four tracks comprising “Sluagh”, the quartet whip forth a fury of gnarly-yet-nuanced black metal, ably balancing beyond-the-shade atmosphere with palpably physical force. As an opening statement, it bespeaks an already firm confidence as well as underlining the still-growing power of Irish black metal: the torch has been lit with “Sluagh”, and NADDRED are carrying it.”

1. The Four Crowned Prince Of Hell
2. Sluagh
3. The Beast Walks The Earth
4. The Dullahan 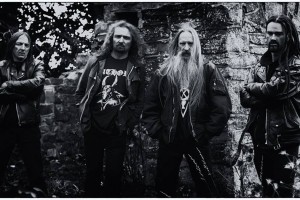 APOSTATE VIATICUM  –  “At The Gates Of Gomorrah”

“INVICTUS PRODUCTIONS presents APOSTATE VIATICUM‘s highly anticipated debut album, “Before the Gates of Gomorrah”. One of the most exciting new bands INVICTUS has come across lately, APOSTATE VIATICUM feature in their ranks a number of Irish metal veterans, largely evolving out of the band MORPHOSIS, whose roots stretch back to the early ’90s. Indeed, ancient times inform much of “Before the Gates of Gomorrah”. The foundation of late ’80s deathrash is firm here, with the pioneering old works of SADUS, PESTILENCE, MASTER, and SEPULTURA setting forth the signposts by which APOSTATE VIATICUM take flight and subsequently destroy.

And yet, it’s what the band do with these influences which makes “Before the Gates of Gomorrah” so fresh. Bolstered by absolutely blistering production, APOSTATE VIATICUM conjure slowly evolving whirlpools of maniacal Metal of Death magick, simmering with patience and slithering in a most serpentine manner, all before exploding into rabid, red-eyed bestiality or striking with iron-fisted doom-trudge, in between moving with martial grace and malevolent ease. One could easily qualify “Before the Gates of Gomorrah” as “martial” metal par excellence, exhibiting as it does a unique ‘n’ elusive stridency that slots itself well alongside INVICTUS brethren DIOCLETIAN, BÖLZER, and ZOM whilst exhibiting a comparably righteous rivetheadedness of GOSPEL OF THE HORNS, VOMITOR, and THROAAT. Altogether, it’s ever-singular EXTREME METAL, and it’s merely the dawn of greatness for APOSTATE VIATICUM.”

1. In Articulo Mortis
2. Anathema Inherent
3. Moloch The Snaguinary
4. In The Shadow Of The Monolith
5. Bastards Of Cain
6. Before The Gates Of Gomorrah
7. BeckonedBy The Callous Dead