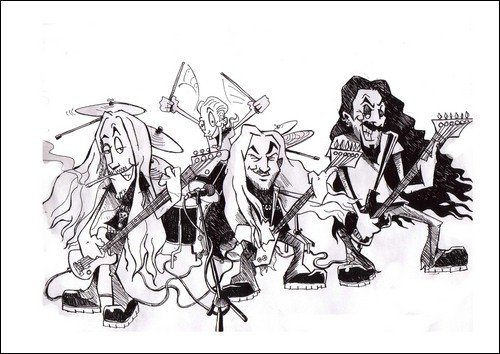 FLATLINE are a Thrash band from Cork who first formed in 1998. They have officially released two CD’s to date. “Fools Day” released in 2000 and “Bleeding Towards New Ground” in 2002. A follow up EP to be entitled “Benevolence Denied” was to be released a few years back, but has not officially seen the light of day yet. Although a number of previously unreleased tracks did find their way onto the bands Bebo and Myspace sites for free download, which I’ve been told were meant to make up the EP.

The band returned for a while with a new drummer who played his first gig with the band in Fred Zeppelin’s, Cork where the band shared the stage with Gaelic Doom Titans MAEL MORDHA on the 17th November 2012. A third album is planned and the band were expected to return to the studio and get a new release sorted for sometime in 2013. But that still hasn’t happened.

They have had the privilage of supporting many big-name bands including Thrash legends ANTHRAX and EXODUS. The band also played a tribute show for MEGADETH the night before the Thrash titans played at The Marquee in Cork on the 13th June 2010 where all four MEGADETH members showed up on the night to catch the band set. As a result of the nights success and numerous offers for gigs they band decided to set up a dedicated tribute act called LANGER 18 alongside FLATLINE.