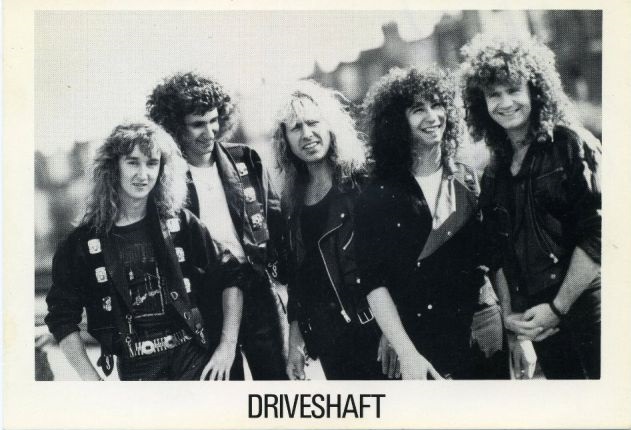 Prior to DRIVESHAFT, guitarist and singer, Gerry Lane had played in several bands from Cork and the surrounding area. During this time he met Noel Redding, ex-bass player of THE JIMI HENDRIX EXPERIENCE, who he toured with throughout Ireland with several bands. During the late 1970’s, Lane joined a Cork based group called DISCOVERY. They released a single called ‘I Know What You’re After / Cold As Ice’. But being unhappy with the direction of this band, Lane and drummer Wayne Sheehy formed the hard rock band DRIVESHAFT in 1980. Some remaining copies of the single were then re-labelled as a DRIVESHAFT release. The band would go on to have a revolving door policy when it came to members, with Lane being the only constant.

Their first proper 7″ single ‘Heartbreaker / Now That It’s Over’ was released in 1982. This was followed up by another 7″ single, ‘Hot Love / Outta My Way’, the following year. And they released a live EP called, ‘Live Cutz’ in 1984 featuring three new songs recorded in the SFX Centre in Dublin the previous year, just before their supporting slot to MICHAEL SCHENKER GROUP. They also supported many other big name acts such as SAXON, DEF LEPPARD and PHIL LYNOTT’s GRAND SLAM.