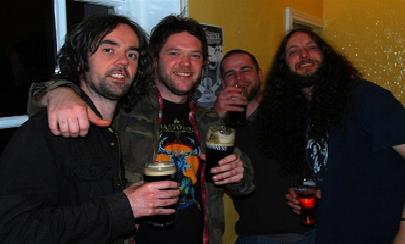 “Thanks a million to Tom Clarke for helping out with this Archive page for the brilliant BAD BOAT. One of my all-time personal favorite Irish bands. It’s hard to pin down exactly what it is about the band and their releases that appeal to me. All I know is that once I start spinning ‘Blues Gone Black’ or ‘Lonely Doom’ I can’t bring myself to interrupt them. I have to let them play all the way through and usually end up hitting repeat too. I had my own piece written up for this myself, but Tom passed on his own write-up which left mine looking like a pile of dog shit. It’s obvious that the man takes a lot of pride in his past musical works. And rightly so, as far as BAD BOAT, and indeed HOWLIN’ WIDOW are concerned.”

In the Boats music, people say they have heard bands like MASTODON, CLUTCH, MELVINS, MC5, KYUSS, FU MANCHU, CATHEDRAL, BLACK SABBATH and IRON MAIDEN. There are indeed a variety of styles celebrated in each song and a prevailing positivity in the progressive aspect of their soundscape. There are some straightforward rock anthems in a classic heavy 70’s sound with an underlying punk and metal edge. There are also some groove laden doom and sludge journeys that would crop up now and then but they all sit well with BAD BOAT’s definitive songwriting prowess. The vocals range from clean howling and growling to harmonies and gruff narrative often with influences from OZZY, WAITS, ROLLINS, CORNELL and some death metal artists. Their debut album ‘Blues Gone Black’ explores a history of rock and metal by their interpretation through familiarity yet at times can be naturally challenging and inventive.

BAD BOAT came about in Belfast 2002 formed by guitarist Graeme Heyburn and Tom Clarke on vocals with a common liking of bands like Kyuss, and Black Sabbath. They created the bare bones of songs ‘Paradox’ and ‘Breakdown’ with the help of Jason Hendry on bass (then vocalist with HONEY FOR CHRIST) and Doot O Reilly on drums. Doot left to work for professional cover band THE UNTOUCHABLES and is still with them now. Jason quit to focus on his main band HONEY FOR CHRIST. Things moved fast when Niall Ward (bass) and Steve Hobson (drums) joined in 2003 and by the end of the year Bad Boat had recorded ‘Oblivion Switch’ demo with the addition of John Gallagher on guitar. Impressed after he witnessed one of their first gigs he decided he wanted to play guitar again (his main musical venture then, psy-trance band SLAM BIGOTS), claiming he hadn’t saw a rock band he wanted to join in some time.