With Cork’s URBAN ASSAULT FEST looming on Saturday the 25th February, we here at the Irish Metal Archive decided to chase down a few bands playing on the day to give all you fine punters a heads up on what to expect. First up we have Dublin Groove Metallers AESECT. 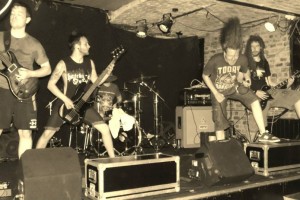 Having played extensively across Ireland over the past few years, 2016 saw the band achieve a high point of touring England for the first time. They have been fortunate enough to play support to some great bands like DECAPITATED, HEART OF A COWARD, XERATH, BEHOLDER, BLOODSHOT DAWN and more. 2013 saw the release of their Debut EP “Buried in the Undergrowth”. Following some line-up changes, it was decided to take some time to focus on writing material for their latest EP “Devour the Earth” which was released in 2015 at their show with HEART OF A COWARD.

The Archive’s newest contributor Ben Cohn caught up the bands two guitarists, Dave Kennedy and Aidan O’Halloran, at their gig just this past Saturday at Fibber Magees to ask a few quick questions and ahead of upcoming performance at the URBAN ASSAULT FEST. He also filmed a part of the bands set on the night which you can check out below.

– First of all! Just explain the name AESECT and how you guys first started playing together?

DK: “We met about five years ago…”, when mutual friends put Dave, Luke and their old bass player Smurf in touch, “…and to be honest we always thought Sect was a cool word but by itself it sounds too much like religion. So we went through the alphabet and settled on Ae as the first part of the name.”

AH: “Yeah! We didn’t know each other before we formed the band. We met by going at shows I think the first one was KILLFACE and then things just happened. We we’re lucky that we all had a similar style of playing and practicing but our lineup has changed since then.”
2015 saw some line up changes for them with the addition of Mark on vocals and Willow on bass.

– What can gig goers expect from you in terms of sound?

“We are a modern influenced metal band with a mix of heavy grooves and fast pace riffs. The aim to get the crowd moving with a fast pace energetic performance, a bit of craic and a few beers!”

– What your thoughts on the current state of the Irish metal scene?

– Can you explain some of the band’s main influences and describe the sound?

AH: “We were definitely influenced early on by bands like LAMB OF GOD and SYLOSIS but we wanted to sound different.”

DK: “I think the best way to describe us is a ‘modern metal band’. Since we first started writing songs they’ve completely changed but our goal is always to be as non-repetitive as possible.”

– How has the band matured over the years and what are your goals for the future?

AH: “We’re always looking to improve. We practiced two times a week for a year before we actually released anything.”

DK: “We’re writing for an album right now that we’re very excited about, we hope to release it before the end of the year.”

– Who are you looking forward to seeing/playing with?

“We’ve played Cork a couple of times now and always had a great show and response from the crowd so we are really looking to getting back down and the line up for the day is great. zhOra, AETERNUM VALE and SOOTHSAYER are doing great things in the scene at the minute. But we are genuinely looking forward to seeing as much of the bill as we can, its gonna be a whopper day.”

– Anything else you want to tell your fans?

DK: “We just wanted to thank everyone who has supported us and we hope they come out to support down in Cork, it’s gonna be a lot of fun, we know some great people down there.”

AH: “Yeah! We’ve loved touring and it’s great to be back in Ireland, we were driving around the four of us in one car for a long time with just one of us driving. We’re excited for the future.”

Interview and Video by Ben Cohn