Noise, as a genre, is one long in evolution and is highly subjective. From the ambient sound experiments of Oliver Messiaen, Terry Reily, Steve Reich and John Cage to Karlheinz Stockhausen, La Monte Young and John Cale’s work in the sixties to the more abrasive post-punk elements of Throbbing Gristle, Whitehouse, Nurse With Wound, Current 93 and Laibach. It tends to exist outside of almost all musical genres, even those as uncompromising as extreme metal. What some perceive to be challenging, artistic and meaningful can appear to resemble lunatics recording themselves falling into a waste bin. Its use of non-traditional devises to create sounds (often through natural and organic sources), harsh electronics and the empty spaces between the desirable and non-desirable is likely to confuse, frighten and alienate many listeners. The epitome of uneasy listening.

And the re-emergence of many of these established names into the relative mainstream has inspired those operating in the underground. The opportunity to record from one’s own space has certainly assisted with this. Ireland has been extremely busy on this front. Names include BENEATH THE SOD, EORÐESLAJYR, STONECARVER, FROM THE BOGS OF AUGHISKA, SIORAÍ GEIMHREADH, DRAINLAND, BLACK SPRING, WRY MYRRH, WOLFLINGE, UNITED BIBLE STUDIES and WRECK OF THE HESPERUS. And it is the latter who provides a member also makes up one of the outfits of this split in the guise of GOURD. Ray Keenehan has joined ON PAIN OF DEATH alumni Hick O’ Aodha to create this bleak filth. They formed in 2014 and released a very well received self-titled EP last year. Whilst they are newcomers to the arena, their partners in this have been around for a while. The one-man outfit LUXURY MOLLUSC has been knocking around for around ten years, under the guise of the enigmatic Stu (Have not been able to find his surname) and have released a series of EP’s on their bandcamp page. But how would it all come together? 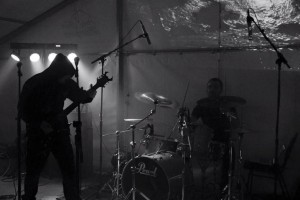 The first two tracks are courtesy of GOURD. And both are big ones. ‘Stir of Dread’ opens up with lurching and spasmodic drumming. Judging on how it sounds, it appears as if it was recorded in a derelict mental asylum. Vocals arrive and they are low, repetitive and harsh. Almost whispered to begin with and echo or distortion applied to them. It has a vague feeling of black metal about them. A faint, woozy hum permeates in the background which reminds me of the keyboard work of Rick Wright on ‘Animals’. This pulses and flickers away in the absence of drums or vocals. An organ seems to emerge like the morning fog. Echo and reverb further gives it a ghostly presence. An audio piece comes through along with slow and methodical snare work. The evil sounding vocals return, heavily processed and distorted. The drums begin to develop more discernible patterns and the fuzzed up guitars make themselves known. It descends to the point where only the buzzing soundtrack is audible before a more ominous tone begins to develop. It resembles that of a war movie at times. Layered vocals begin again to the drum beat against it. The backing almost sounds like an alarm or a siren. A sense of impending dread envelopes as to what lies ahead. The noises get increasingly fervent. Some of the spacey/trippy effects brings to mind the earlier krautrock bands and especially HAWKWINDS’s ‘Space Ritual’. The drums keep up a consistent beat before relenting. Just the sound effects remain. All that is left is an air of tension and suspense.  Picture it being played in an early Ridley Scott movie.

‘Withering’ sees a creaking and warped opening. The sound effects give it a mechanical and destructive feel. The vocals share a similarly harsh undertone. They appear to have been heavily processed to match the sound effects around them. Guitars remain low in the mix but register faintly. The vocals fade in and out against the background noise with a sense of violence and annihilation. A distinct sense of THROBBING GRISTLE about it. Sound effects throb and pulsate but come across as being austere and bleak rather than comforting and warm. Distorted riffs are peeled off alongside low, deep drum beats which creates a hollow and hypnotic vibe. Faint audio can be heard amid the murk. Harsher vocals begin to seep their way back in again. The crackle and buzz of electrical can be heard leading to an eerie and unsettling backing track Low and deep Gregorian chanting sees out the piece. 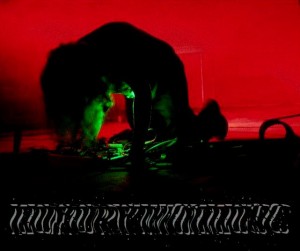 The remaining numbers are brought to us by LUXURY MOLLUSC. And unfortunately it is a bit of a mixed bag. ‘Forgotten Mortice’ almost sounds like the lone foot-steps in a deserted industrial wasteland with the faint hum of machines being the only indication of anything remotely alive. It makes for a distinctly unsettling atmosphere. Dark and wretched vocals can be faintly heard in the background. A weird trippy background sound almost comes across as being akin to early psychedelic rock. ‘Tremens Chamber’ begins slowly but gains tempo and power quickly and there are far more elements on display. It is almost like a storm or a battleground in its bombardment. Sounds collide, wallop and thud against each other. Shrieking vocals appear lower in the mix but remain an insidious presence. When they come through, they show signs of effects being applied to them. It also appears to have the feel of more traditional instruments. Whether they are played organically or through sequencers.

‘Rib Vault Red Cow Buttress Black Horse’ features a segment that reminds one of industrial music and impresses greatly. The vocals when they arrive are suitably howls of despair and anguish. Overall, it feels like a continuation on from the previous number and lacks an established identity of its own. ‘Alcove Edge’ is the shortest track and, frustratingly feels as soon as something interesting is about to take place, finishes up. The sound of blocks and slabs being pushed aside to reveal something hidden underneath but we never find out what it may have been. ‘Scoliosis the Second Temple’ involves a decent climax as events become increasingly tension filled and dramatic. It perhaps arrives too late as much of the rest of the track is quite understated. Not the finish many would have expected. A bleaker, harsher and more intense number would have sent most away content and yearning for more. 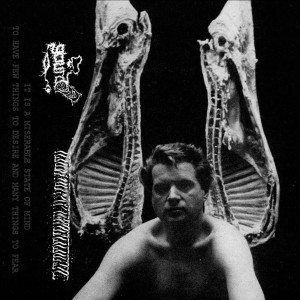 The nature of the genre is perhaps the reason for the inconsistencies. The emphasis remains firmly on the expression of negative emotions and situations as opposed to the actual structures of the music. When it comes together, it works extremely well, and allows the listener immerse into the canvass set out. The filthier and harsher elements can mix the with more meditative moments without feeling like they are being tagged on for the sake of it. For the ideas thrown out, some will fail to stick however. Some of the tracks fail to distinguish themselves from one another. Its not that they are put together badly, or lack purpose in its playing. More that they can blend into one another without having a distinct personality of their own. That could be the point however. When performed live, they can almost come together as a single movement or piece.

On this side, both outfits have been busy enough recently. GOURD performed at the Galway Dark Arts Festival, along with Dublin’s Emerald Haze event. The former also saw Stu appear under the banner of a new project by the name of PHLACCID. There are however, no current plans at the moment for dates in the future. Hopefully some will be lined up in conjunction with this release. For those metal fans looking for something to stretch beyond their usual listening and comfort zone, there is much delights to derive from both.