Some bands and some albums will stay with you always. From those who grew up around the time Philip Lynott left SKID ROW to join his former ORPHANAGE band-mate in a new outfit, watching THIN LIZZY perform ‘Whiskey in the Jar’ on Top of the Pops, or those who recall seeing THIN LIZZY at the National stadium, to discovering them through an older friend or relation and kids hearing them on Spotify at the moment. They were a band who had a monumental impact upon the Irish music scene, not just rock or metal, music in general. They along with a few others, dragged Irish music blinking and disorderly into the wider market. Many have followed in their footsteps to worldwide recognition. Bands such as METALLICA have been loud in their praise also.

The centre of attention circulates around the appearance of Brian Downey, along with new cohorts, under the guise of ALIVE AND DANGEROUS. He is the man who went from school-boy friend of Phil Lynott to band-mate in ORPHANAGE, THIN LIZZY and Phil’s solo efforts. He was present through all the early travails, the incredible heights achieved and the ultimate tragedy following his best friends death. If anyone is to represent the band, it is surely him. This is the final date of an Irish tour, which has taken them around the country, before a sojourn to Sweden, Germany, France and further afield. It is clear that many have traveled out especially for tonight. The hoary old rockers with classic patches, along with a younger generation, are milling around the bar and smoking area eager for the commencement of tonight’s proceedings. The eventual opening of the door leads to a flood of attendees into the main area. 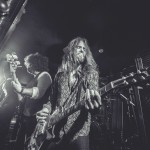 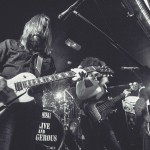 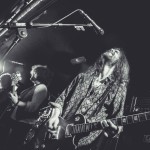 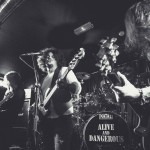 The band arrive on stage to a warm reception, and begin to crank up their instruments. There is no degree of guessing required as to the songs performed. As per their title, the set revolves around that of the classic 1978 live album and the songs included on it. Downey is instantly recognisable behind his huge drum set-up, albeit with slightly less hair than in his seventies prime. His band-mates stand out as well and it almost makes one rub their eyes in the belief they had gone through a time machine. Bassist and front-man, Matt Wilson, is full of poise, strut and confidence. Plus a wicked afro. Phil Edgar provides the sweet riffs and hair past his ass. If anyone was to assume either men were recruited for their resemblance to former Lizzy alumina, they would be incorrect. Both men are worthy musicians in their own right and have a serious feel for these tunes. This is clear from the moment they stride into ‘Jailbreak’ and ‘Emerald’. Wilson’s vocals are soulful and smooth, whilst the solos are on the dot. Meanwhile, Edgar combines well with Grace for the intricate dual soloing Lizzy made their trademark. ‘Southbound’ retains its beautiful recount of a traveler returning home after trying to seek his fame and fortune, along with wonderful backing vocals. The eternal cover of Bob Segar’s ‘Rosalie’, with its segue into ‘Cowgirl’s Song’, sees Wilson employ the same patter as Phil’s on their original version. It retains the same fizz and crackle as that one. 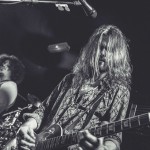 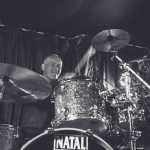 The swing and groove that Downey brought to the band is demonstrated in spades via ‘Dancing in the Moonlight’. It is clear he has lost none of his drive and technique with a powerful venedition of it. Their influences were always varied and provided them different shades to many other hard rock bands of the era. They charge straight from this into the head banging and air guitar anthem of ‘Massacre’ to the achingly tortured and beautiful ‘Still in Love With You’ with its gorgeous guitar solos and a pained vocals to the gangster funk of ‘Johnny the Fox meets Jimmy the Weed’. Wilson replicates Phil’s almost proto-rapping vocals to aplomb. The magnificent ‘Cowboy Song’ follows with its delicious guitar solos and warm bass over its tale of life on the road. And obviously great they retained the link back to the piece from ‘Rosalie’. Gets the crowd clapping along yet again. And then a song called ‘The Boys are Back in Town’. Anyone ever heard it before? A new one to me but I suppose these deep album cuts should have their place. 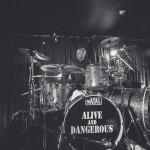 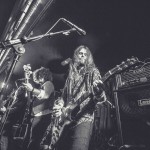 Personally, I was always iffy on the latter half of the album but tonight they come alive (pardon the pun). There is a tendency for many to escape to the bar for that period but they would be missing out on some hidden gems. ‘Suicide’ originally from one of the earlier albums packs a hefty weight and keeps the sense of danger and menace that the original had. ‘Are You Ready’ is one of those tracks that people constantly forget about but is missed when not played. And if I had told you to miss the next track you better ‘Don’t believe a Word’. Its clear for all their celtic, trad, folk, funk and other inclinations that rock was their primary driving force. Powerful riffing, throbbing bass and instantly recognisable drum beats. And it keeps up the emphasis that was paid towards the ‘Jailbreak’ album. The band was obviously riding on a wave after the ‘Bad Reputation’ and ‘Jailbreak’ albums following success in the states and this was reflected in the set. ‘The Rocker’ was perhaps the first track the band were up front and saying “this is who we are”. It has always been a key part of their set even despite it coming from the much overlooked ‘Vagabonds of the Western World’ album. Finishing off with a devastating version of ‘Whiskey in the Jar’ following a playful departure from the stage, they have displayed a band on the rise. 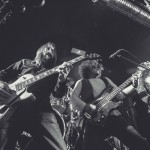 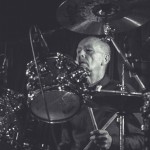 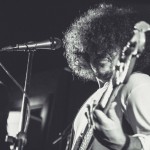 Not everything is perfect. Wilson gets slightly tongue tied during ‘Boys’ and there is an issue with the guitars at one point requiring a change over. Slight misgivings however. A band in the live arena is liable to have slip-ups, no matter who they are. The passion, camaraderie and skill shines through. It is clear that much lies ahead for these lads. A trip over to Europe and a possible studio album is the plan as it stands. Tonight, it has been a pleasure to be in the company of a drumming legend and to hear classic tunes played so well.

More photos can be viewed on Overblown Webzine.