Founding member of THIN LIZZY, Brian Downey has recently taken back to the stage again under his new ALIVE AND DANGEROUS moniker… named after the bands legendary live album. Philip Morrissey was present on the night of the bands Cork show in the Crane Lane Theatre and managed to grab a few minutes with the Dublin drum hero…

“That whole period, we were on the crest of a wave at that particular time and it comes across on the album.”  The words of Brian Downey as he reflects upon the legacy of one of rock’s greatest ever live album.  A founding member of one of Ireland’s premier rock bands, Thin Lizzy, he is in town tonight under the guise of Brian Downey’s Alive and Dangerous.  A packed green room is testament to the amount of fans eager to share memories, take photos and have merchandise signed by the man himself.  This eventually clears, and I manage to shoot the breeze with him on a variety of different subjects.

Tonight has been the final date of a tour which has taken them around Ireland, before setting off to Europe and the band members are extremely pleased with their night’s work.  Eight nights in seven different locations is the ideal way to road test an emerging line-up in front of a live crowd.  And the band-leader is quite satisfied with how things have gone so far with particular praise for the Crane Lane attendees.  “Cork tonight was fantastic as well.  Excellent audience; great sound and on stage we really enjoyed ourselves.  And the whole tour has been like that.  We really didn’t have a bad gig.  So touch wood everything is going to go well for the rest of it.” 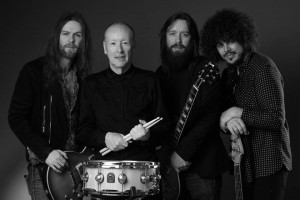 Brian is honest enough to admit that the current line-up came together by happy accident.  Brian Grace is/was the musical director for Vibe for Philo since day one and a well-known guitarist in his own right.  Both men would have known each very well from dealings over the years.  A tentative discussion had been put in place for jamming purposes on a future venture together.  This all aligned when he went along to see The Low Riders in 2016.  “They asked me up to play with them.  So I went up with Brian Grace and Matt Wilson and Phil Edgar and realised then that this could work.  So we had another meeting with Brian over dinner and he suggested that we get a few rehearsals together with Matt and Phil.  That’s exactly what happened.  We brought them down to Dublin, they live up by Belfast, and got them into rehearsals.  We immediately knew that this was going to be good.”

Any worries about them struggling with the material was quickly put to bed.  “The guys were very conversant with all of the tunes, so there was no real problems as such.  That was half of the battle really.  There was no struggle at all.”  Downey contacted some people to see the interest for it and to get the ball in motion.  This quickly led on to the establishment of these dates.  Any accusations of this being a cash-in is quickly shot on.  “I have seen bands that have been fairly contrived but this band came together very naturally.  Its just great to play on stage with the guys.  They have set themselves a high standard which will be kept up hopefully.  Everyone’s well into playing the tunes and know them back to front now.  Through a lot of rehearsals obviously to get it tight.”

The band’s set-list tonight is obviously based around that of the 1978 album which the band is named after.  The memories are fresh in the mind of the man who provided the back-beat and the rhythm section to it.  A band who were “on the crest of a wave” but “the pressure was on, and we knew that”, recorded a series of dates from London and the US.  One date in Canada, became famous in Lizzy history.  “It was the Seneca College one that was the best to put on the album.  Along with the London show.  So, that’s where the album came from.”  The Toronto college even saw the band use unique ways to get the best possible sonic quality.  “We mixed it up a bit when we went to Canada to play a tour there.  In fact, we hired a mobile studio when we were there which we brought to a gig and recorded with it.”  Having built up their reputation through powerful live shows, and significant radio play in the US with the ‘Jailbreak’ album and its lead single ‘The Boys are Back in Town’, this album was set to push them over the edge.  It may have become one of their most famous album’s ever in fact.  “Even to me now, it sounds pretty fresh.  Phil was in top form, we all were actually, but Phil was in top form for those live recordings.  “As I said, Jailbreak was also a really big seller for us.  It will obviously be remembered for The Boys are back in Town but I think that Live and Dangerous is the album that personifies Thin Lizzy.” 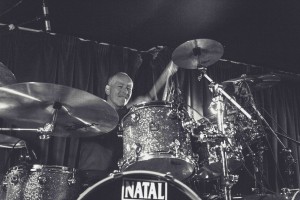 The legacy of this album, and the band itself, is a matter of pride for Downey.  Despite all the trials and tribulations undergone by the band, issues about line-up changes, a slow breakup and the tragic death of Philip Lynott, their impact still remains.  “Maybe over the years, since Phil died, people have forgotten about us a bit.  Maybe in some other countries, apart from Ireland, the UK and parts of Europe, we could have done better.  But that’s life, you know.  We have contributed a lot to rock music in Ireland and elsewhere.  Yeah I know we could have been bigger, and most bands will have said the same over the years, but we have done quite well.  So I am happy enough with all of that.”  Always tagged as being just a hard rock band, Downey is keen to point to their varied influences “We had a bit of folk, a bit of jazz, a bit of rock.  Ballads even.  Whiskey in the Jar began as a very popular ballad back in the sixties.  Our influences are very wide”.

Both he and Phil grew up together from being school-friends to band-mates, and he emphasises how important he was to the band.  His playing, personality and image were integral in many way but Downey points out there was more to him than all that even in the early days.  “Phil had certain ideas about what he wanted to put into the band.  His song-writing was coming on leaps and bounds by then.  We used to play Phil’s arrangements as well as the cover versions that we used to do even before we recorded anything.  And then when we went into the studio, everything was ready.  Phil was very prolific then.  He had lots of songs that we could pick and choose from.  And that’s exactly what happened on the first album.”

The band are in great spirits and looking forward to dates coming up in Sweden, Germany, Holland and elsewhere.  When asked what lies ahead after that, he seems determined to make this an entity which exists in its own right.  “For the long-term, eventually we will go into the studio with some of our own tunes and you never know what might happen there.  So we are all really looking forward to the rest of this year and next year.  So hopefully we get into the studio and record our own material.”  I, for one, look forward to seeing what they can engineer together.  Until then just enjoy great songs being played superbly and in the presence of a genuine legend.