It seemed to be a guarantee for perhaps one of the messiest nights in living memory. Combine the rowdy Limerick metal audience with extreme metals most enduring bands. And schedule it all for St. Patrick’s day. That is really pushing the boat out. And especially when you have it taking place in Dolan’s. The quayside bar has become the destination of choice for those located in the neighbouring counties. Easy to reach via car and near enough to the City Centre for public transport, it combines a friendly atmosphere for those hungry and thirsty revelers.

The task of shaking off the hangover from the night before was made even more problematic by the daunting prospect of getting across town to reach the bus in town. Alternate routes had to be sought whilst taking increasingly frantic messages from my girlfriend who was on it already. Achieved with literally seconds to spare. The bright and breezy morning in Cork takes a distinct turn for the worse on the way up. Upon disembarking, we are almost blown half-way back down the motorway. Luckily enough, the hotel is around the corner and just up the road from the venue. A quick change of clothes and we were off out to see who was around. Various members of ZEALOT CULT and WARPATH were milling around, getting ready for the night ahead. Several Cork heads are also present and conversations are held over a few cold ones.

Before too long, the night is upon us. Tasked with opening up proceedings are four piece from Oxford, BLACK SKIES BURN. They are perhaps one of the bands that gives modern grind a bad name. The sound of bands such as BRUTAL TRUTH, CARCASS, NAPALM DEATH and others have been appropriated by many in their wake and that is understandable. The inspiration, spirit and energy has been unfortunately diluted as the years have gone by and been shared across the years. To make yourself stand out at the moment, it is necessary to put something of yourself into the music. Far too often, the safe option of guts and weed seems to be preferred. Songs like ‘Hits From the Mong’, ‘Pigs in Blankets’, ‘Crippler Crossface, and ‘Cunt the Fuck off’ blast along fairly well but don’t stay too long in the collective memory. The playing here is perfectly fine but I have seen many bands play like this but far better.

It’s been a while since WARPATH were down here and there is a sense of anticipation. The lads have not been resting on any laurels though. High profile slots, along with appearances at some of Europe’s most esteemed festivals meant that they have been extremely busy. The eternal issues of lineup changes and scheduling around work and family life, faced by most working bands these days, has also risen their head. Tonight had originally meant to have been the launch of upcoming EP “The Ambience of War”. Frustratingly, due to clearance issues, this has been put back until next month. A new track had been released ahead of this and has been receiving a lot of attention so far. From speaking with them afterwards, it is clear that they are looking forward and determined to build on it. 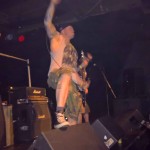 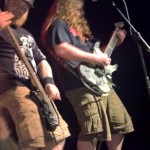 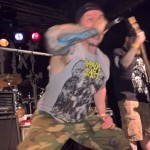 It is clear to see that any concerns around WARPATH‘s new lineup should be quickly forgotten about. Playing together for some time now, they are impeccably tight. They have obvious connections to the more brutal style of death metal through their love of CANNIBAL CORPSE, SUFFOCATION, MISERY INDEX and DESPISED ICON. They have added a greater sense of precision in their playing that only emphasises their heaviness. Kicking off with the new release, the band are setting out their intentions. It is a particularly mean and vicious sounding number. A few more new numbers show the fluid and tight playing styles of guitarists, Joe Merriman and Karl Mulraney. A nod back to the promo demo from 2012 in the guise of ‘Infectors’ is introduced (check out the “First Wave” compilation from here for example) and it is impressive how much they have developed on it since then. The work by new drummer Dario Di Ruzza stands out. He is able to maintain a remarkable amount of groove which may have been previously lacking. This is whilst pummeling away at the skins like it owed him money. A welcome return to debut album “Gorefare”, sees the band perform an ‘Extreme Rendetion’. Frontman, Darren Keogh, is much in demand for guest vocals slots and it is clear to see why. His growls remain as strong as ever and demands the crowd to show their appreciation. A slight downer sees ‘Hunted Like the Prey that You Are’ hampered by sound issues. Happily, that is the only fault with their set.

If WARPATH represented the more modern style of death metal, then ZEALOT CULT are distinctly old-school. They are veterans at this game by this stage now through their former association with Limerick outfits, THE SWARM and VICTIM X. Even though they have been inspired by the likes of the likes of ASPHYX, PESTILENCE, ENTOMBED and OBITUARY, they are no mere copyists. Through countless support appearances and punishing displays at the Siege has set them out as being one of Ireland’s finest exponents of extreme metal at the moment. It therefore disappointed many when they were unable to play at the recent Urban Assault festival down in Cork. Happily, a six year period without a physical release was ended last year with their “Karmenian Crypt” EP. The production levels may have been improved but the spite and aggression remains. It was with this release in mind that they commenced their set. The back to back performances of its title track and ‘Eternal Winter’ shows a band determined to show their current work and what fans can look forward to. 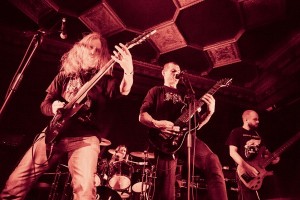 There is a distinct whiff of ‘Covenant’ era MORBID ANGEL from it, from the commando-like drumming to the backwards riffing. At other stages, the slower styles bring to mind ‘Leprosy’ era DEATH. They may be wearing their influences on their sleeves at times, but when performed with such intensity and ferocity, that can be forgiven. The guitar lines from Mick Carey is particularly impressive. Meanwhile, ‘Sea of Suffering’, has such a relentless and dirty bass tone courtesy of Alan Lee. He really locks down in impressive style with drummer, Declan Malone, who barely pauses to take a breath throughout. A look to the future comes in the form of ‘Spiritual Sickness’ which is set to appear on their long-awaited album. And if this is a glimpse of what is to come, it could well be the Irish release of whatever year already. Jay Quigely’s vocals are utterly violent and demonic, whilst the band just lock down perfectly together.

It is then to the headliners, NAPALM DEATH. It is hard to believe that this year marks the 30th anniversary of the seminal ‘Scum’ album. For many bands, this would have been a peak that would have proved impossible to replicate. The fluid nature of their earlier lineups meant that it was unlikely that the same album would have been repeated. As some left, different members arrived and brought their own ideas and styles. This may not have always worked out perfectly but they at least were willing to try other ideas. The blast iron approach of the first few albums has gradually developed into more of a straight ahead death metal band. But imbued with the sense of political outrage and disgust at corruption and exploitation that the original band had. It helps that the current members came out of the hardcore/crust scene that helped nurture them. You could not imagine them making an album involving zombies and murder for example. 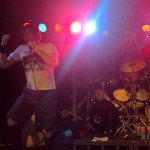 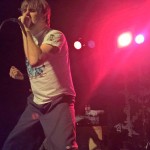 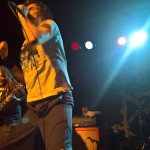 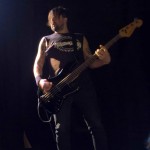 The crowd roars its approval as the band enters the stage. Tonight, the position of bassist is being (temporarily) filled by Jon Lindqvist of NASUM fame. Shane Embury is currently away on BRUJERIA duties. The floor is now completely full. Bodies and pints get flung in all directions. I take the cue to step back to preserve my own well being. Frontman, Barney, reminds the audience of who the band are. The current NAPALM DEATH lineup, minus Shane, have been together for longer than any other era and have been in a great run of form album wise. Latest offering, ‘Apex Predator’ continues on with this trend. Its title track, ‘Smash a Single Digit’, ‘Stunt Your Growth’ and ‘Stubborn Stains’ all get an airing and received extremely well. The anger still burns strong through ‘Evolved as One’ and ‘It’s a M.A.N.S World’. The latter of which is dedicated to the repeal movement here.

There is a wealth of material for the band to delve into and they state their intention to drag up some rarely performed numbers. The familiarity of ‘Scum’, ‘You Suffer’ and ‘From Enslavement to Obliteration’ is interpersed with tracks like ‘Deceiver’ and ‘Twist the Knife’. Hearing ‘The Code is Red, Long Live the Code’ was a personal highlight for me. Throughout, Barney is in cracking form. He charges from side to side full of restless energy, barks his vocals showing he has lost none of his ability and shows his humour. At one point, a stage diver asks the band to hold off starting a song until he is ready to jump into the crowd. He is clearly bemused by this and informs said individual of where to go. The crowd are into this as much as the band are. Lindqvist is a damn solid player and matches well with the drumming powerhouse of Danny Herrera. In the continuing absence of Mitch Harris, touring replacement John Cooke does a steady job. Still no sign of his return and the band remain tight-lipped on the affair. Their attack on those enforcing crippling rent prices in ‘Slum Landlord’ and the still incredible ‘Suffer the Children’ precede a trio of cover versions all taken from the ‘Followers Not Leaders’ set.  ‘Face Down in the Dirt’ by The Offenders, ‘Hate, Fear and Power’ by Hirax and of course ‘Nazi Punks, Fuck Off’ by Dead Kennedys. 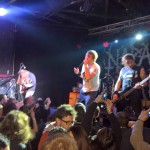 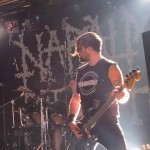 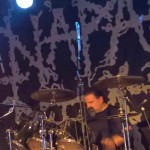 The band then finish off a triumphant set with yet another new song in the form of ‘Adversarial/Copulating Snakes’. Still a band with much to say and a lot more to go. A DJ set upstairs concluded the night, before the tired revelers drifted away out into the fierce Limerick night.