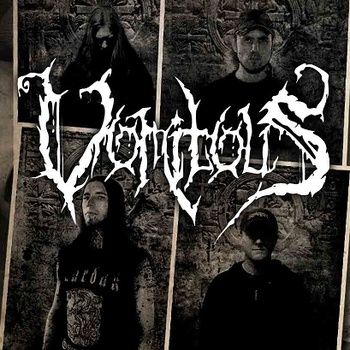 Alan Gill has been active in the Irish Metal Scene since the early 1990’s. Delivering lethal doses of Death Metal down through the years with various bands such as PERIODIC SLAUGHTER, SEVERANCE, AGONIST, CORPSECANDLE and PUTREFY. In 2001 he formed VOMITOUS with the purpose of paying homage to late 80’s early 90’s Death/Thrash Metal – mainly the Florida scene bands. And with Michael Ardill (CONDEMNED) on bass and Gerard Ritchie (HEXXED) on drums, they recorded a fairly rough around the edges rehearsal demo at Belfast’s Soundmill Studios in early 2003. There were two original tracks on this demo. A cover of MONSTROSITY‘s ‘Ceremonial Void’ was also recorded. I can’t say if it was during the same session but it is included in the download for the rehearsal below.

Line-up troubles prevented the band from progressing much in the following years, but roll on a few and Alan has stepped back from the mic stand with Mathew “Mass” Firth being enlisted as the new vocalist and Jay Rogers also joining the ranks on drums. In 2009 this line-up re-recorded the two tracks originally featured on the 2003 rehearsal demo along with a third new track which was released as the ‘Devoid Of Divinity’ EP. And the recording upgrade certainly paid good dividends by giving the earlier tracks a new lease of life. This is proper Death Metal driven by an honest passion for the old-school ethics of the genre. With all three tracks clocking in under the three minute mark, this is a quick one-two salvo finished off with a vicious head-butt square in the face. Excellent stuff!

The band have the ‘Devoid Of Divinity’ EP available for free download from their bandcamp, so do yourselves a favour and check it out.