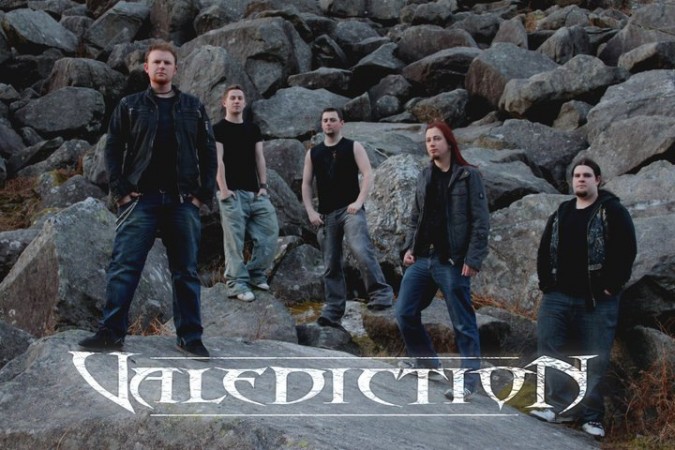 VALEDICTION are Dublin based Melodic Death Metal band. Originally formed in 2005. They released one demo back in 2008 called ‘The Bleeding Tower’ with Irish metal veteran Lar Fraser on vocals. Come 2009 Lar was out and the band went on the hunt for a new vocalist. The position was eventually filled by Martin O’Hanrahan, who was the also the vocalist for an earlier band called ASCENSION which also featured VALEDICTION guitarist Stephen Hughes.

Fast forward a couple of years and VALEDICTION have just self-released their debut album ‘The Primitive Architecture’. Recorded by Mick Richards at Trackmix Studios, it’s an absolute blinder of an album by all accounts. A massive step up from the first demo. Credit to band for throwing so much time, effort and thought into the writing, recording and packaging of this album. Everyhting is spot on.

Recent DARK TRANQUILITY is definitely the most obvious comparison that comes to mind when listening to‘The Primitive Architecture’. Keyboards incorporated hint to other more extreme Death/Black Metal styles. The drums and bass are consistent and provide a sturdy backbone. The songs are loaded with quality guitar riffs. Vocals are standard for this style of metal, throaty and mostly one-dimensional, though it doesn’t detract much from the music.

Title track ‘The Primitive Architecture’, ‘Transcendent’, ‘Seige Of Dis’ and ‘The Bleeding Tower’ are as good as any Melodic Metal tracks from any of the established European acts doing the rounds at today. If there’s any justice in the world then VALEDICTION will catch the ear of a good record label and get picked up. After producing an album of this quality and standard they thoroughly deserves to be.