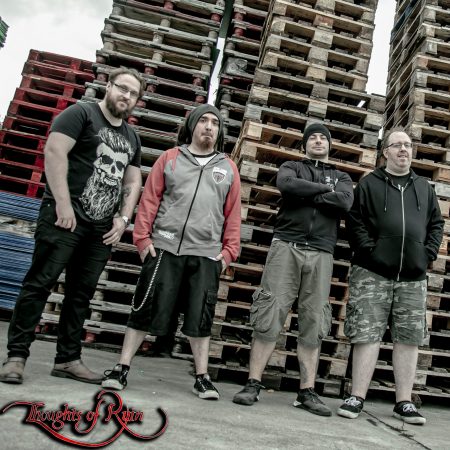 In Early 2005, the founding members, Colin and Dave sat down with nothing but their guitars, a computer and beer to write some songs they, as metal fans would like to listen too. After the songs came so easily they decided to recruit the full band and start playing some live shows. After some line-up changes it settled with Colin and Dave on guitars, Martin on Bass, within drummer Niall and Brendan, former vocalist of CELTIC PUNCH.

A 6 track EP, “Convictions”, was recorded and an extensive touring schedule was undertaken that resulted in shows all over the country with Irish bands such as MIKEGOTSPIKED, CLERGY, ITCHY TRIGGER FINGER, SILENT CONFLICT, COLDWAR and 23. This was followed by great reviews of both the CD and the live shows as REVENANT honed there show in the live atmosphere. Their hard work and commitment resulted in support slots with French heavyweights DAGOBA on there Irish Tour and German veterans NECROPHAGIST.

In 2007 the band changed their name to THOUGHTS OF RUIN andrecorded their debut album “Reclaim The Throne” at Cox In Hell Studios, France by Kallaghan (SIKTH) who also did mixing and mastering.

After a nearly 13 year hiatus, most of the original line-up of the band has reformed with the first new music officially release in December 2020, ahead of their second album in 2021.