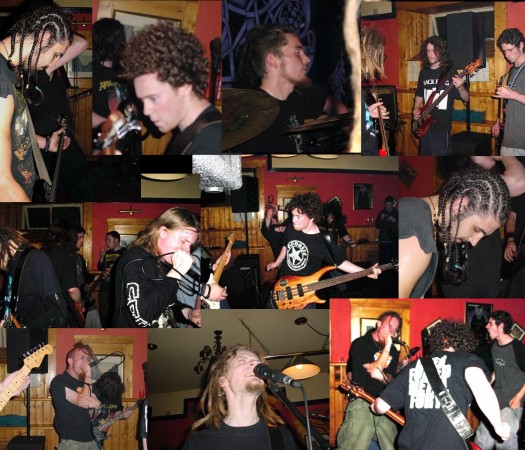 I’m going to leave this bio up to the Barry and Howard!
Taken from their accounts on the bands facebook page…

“Jaysus, nostalgia trip!
I met the lads through going to their gigs. They were the kinda band I wanted to be in…Sludgy Crunching Metal, with the gravel throat vox…
Played a few gigs alongside them with another band (Blackspot) that I played bass in
Got friendly with Alan and Barry, had a few drinking sessions. Soon as I found out they were looking for a bassist, I jumped at the chance
I originally was supposed to join on bass…Nick was to switch to guitar. Played my first gig with em at Freakscenes 3rd bday party in Henrys…got told 5mins before showtime that I was to play guitar! Haha… Good times! Played one gig in Galway on bass (Nick couldnt make it). Did a few shows around Cork, and we wrote a fair few new tunes at the time
When I joined, it was Myself, Murray, Alan, Barry and Nick… We did a fair few gigs like that, Barry left down the road a bit, and with that we (me, al and Mur) decided we’d ask Nick to leave too.

We didnt do much for about a year, spent most of it looking for musicians…drafted Frank in on guitar and jammed a lot. Then we drafted Dave Condon in on 2nd vox (Altar Of Plagues), and jammed away with no bassist. Played a few gigs with some stand in bass players. Wrote a lot of tunes there too, putting to bed all the old Hook stuff. Murray then left, we continued with Dave and Ben (This Weary Hour) on bass, before myself Alan and Frank went off to form Fivewilldie
There loads more, just need to think! We had a brief demo with some new tunes on it, think Barry had me as Howard, Guitars & testicular fortitude. Had four new tracks I think December was one of em, The Child was another…cant think of the others..Big Brother maybe?
There was post Barry Hook track on the UCC White Telephone complimation… Actually, Dave Murphy has lots of Hook recordings from his time with Sludgehook…
I also had a fascination with Barry cats balls…Cheesy beans were a big part of the practice schedule. For the Record, I’d love to do another Hook gig…couldnt see it happenning though. Theres a video floating around somewhere, some good footage of us all getting electrocuted… we did a ridiculous shoot in a farm, also in the Coleseum….and a Cave in a friends gaf…song was “Concrete Bed”… I only ever played Bass at one gig, was a guitarist… Some Hook stuff has survived in Fivewilldie, “What They Say” has a riff from back in the Barry days…basically its a riff we slowed waaaaay down…”