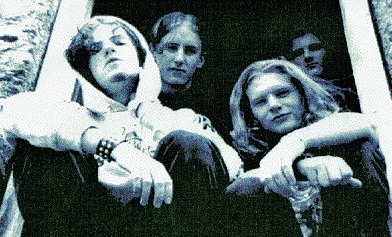 I’m going to leave this bio up to the Barry and Howard!
Taken from their accounts on the bands facebook page…

“The year was 1995. Me and my buddy Barry Brien were into Metallica and Machine Head. I had a bass and he had a guitar and we wrote our own riffs at my gaff every now and then. Barry and his friend Nick Brennan (also a bass player) and I all went to the same Irish college in 1996 and became mates. We even brought our guitars and played in front of the whole Irish college with no drums or singer one night, it was supremely embarrassing. I think we were trying to impress some girls. Anyway, after we came home we wanted to form a proper band but Barry Brien wasn’t especially into it so me and Nick decided we’d start one ourselves. I had a friend in school called Alan Setter who was into Clawfinger and Marilyn Manson so I figured he’d be able to play drums. He actually got a drum kit off his old man and put it in his attic and learned how to play, much to the chagrin of his neighbours as a drummer learning how to play is a pretty annoying sound. I put four strings on a knackered old les Paul copy I found in my house (Max Cavalera-style) and became a guitar player. We called ourselves Sludgehook for some reason and Nick decided to sing as he was the tallest, I guess. Well anyway we started trying to jam, first in a rehearsal space in town that we tried but it had been flooded the night before (so that didn’t work). Then we went to my house, which is pretty big so we got away with it there for a while. We played our first gig in Douglas Community school in the winter of 1997. My mum drove us up and there was some funk band playing right before us. I remember the whole crowd was made up of bespectacled bearded dudes in their late teens, early twenties, who were inexplicably sitting in a Douglas Com P.E. hall after hours on a Wednesday evening. Very weird. Then we started playing in town. We played in a place called Sally’s which is now called Larry Tompkins, I think this was the end of 97 also. We supported a band called Virtue who had one Alan Murray on vocals. They had a song called “Are You Human When You’re Dead?”, ha ha. Their drummer was a psycho and fucked up Alan’s drum kit, think he broke a pedal and knackered all the drum skins, before going for someone in the jacks with a drumstick. Anyway we played and afterwards someone said “you’re good for a cover band” and I said “cover band?” and he said “yeah, you’re a Fear Factory cover band, no?” and I said “No”. Ha ha. Then we started playing the Phoenix, as I’m sure you remember Dave as you were at loads of those gigs. Well we played a load of these with bands like Piddle, No Remorse, DAT 14, Section 8, Ten Point Rule, Defect, etc. Somewhere along the line, Murray joined the band, but I can’t remember if we asked him or he asked us. Anyway he had long hair, had a tattoo, and wore biker gloves and was a total rock star so he was in, no questions asked. We played in Nancy’s a lot, and UCC, and Freds, all the usual spots. We made a tape demo called “Issues” sometime in 1998 with songs like “Hatemail” and “X’s” on it. Me and Alan taped over all our old albums and put this on it instead, then printed the covers out on his Dad’s colour printer, and sold them for £1 I think. Or possible £2. Then in 1999 we recorded a CD called “One False Moment” which is pretty hilarious if you can get a hold of it. We also recorded a video for a song on this which I would love to see someday – it was ‘Concrete Bed’, the idea being that we would send it to No Disco which was a grass-roots music show on RTE at the time. We had a few good gigs, I think the best was some big gig we played at UCG. It was great fun. We got Howard in the band around that time too, around 2000? Anyway, eventually I wasn’t getting on with Nick that well, and Alan and me weren’t really mates anymore so I fucked off and that was that.”