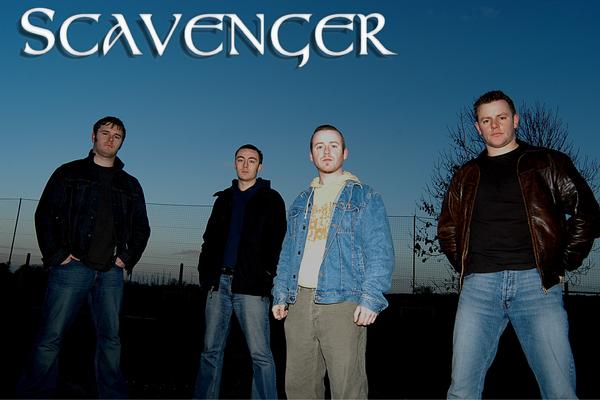 SCAVENGER originally formed in late September 2001 and immediately set about writing their debut self-titled demo album consisting of 8 tracks which was recorded the following December of 2001 in FatDog Studio Co. Meath. The album was officially released soon after and received great local reviews from METALIRELAND (‘Abum Of The Month’) and Metalworks, as well as being very well received abroad also. They were immediately labelled as a Power Metal band, but there were a lot more influences showing through on this album such as Thrash and NWOBHM. Check out the mellow ‘Sad Wings Of Destiny’ style intro and breakdown in the middle of ‘Slaughter Of Innocence’, as well as the occassional ROB HALFORD wail throughout the album and the DANZIG feel to ‘Shadowed Lands’. The 8-track, 34 minute album is chock full of well written, fast-paced, Thrashy/NWOBHM/Power Metal tracks, loaded with quality riffs that are enough to keep any metal fan more than satisfied. All rounded off by Peter Dunne’s top-notch vocals. The production quality isn’t the best by any means but they threw everything they had at this release. Quite an achievement considering they had only been together a few months and only spent a few short weeks writing the album before it was ever recorded.

In March 2003 they returned to FatDog Studios to record their second album, ‘Madness To Our Method’. It was released through Ireland’s SENTINEL RECORDS in early 2004, but was first re-mixed and mastered by Stuart Anstis (CRADLE OF FILTH) at SoundCage UK. It marked a notable change in direction for the band. The break-neck riffing which was so prevalent on the debut release was reigned in and refined. The songs had a more mature approach incorporating even more influences than previously such as Prog and Doom. It’s a much more epic and darker sounding album than the first. A great release which was critically very well received.

They gigged as often as possible all over the country, sharing the stage with fellow Irish bands such as PRIMAL DAWN, CONDEMNED, HEXXED, ABADDON INCARNATE and PRIMORDIAL. Building up their reputation and profile as a hard working and ‘not to be missed’ band. They also played support to international bands like AMON AMARTH, DESTRUCTION and SLOUGH FEG. And have toured Ireland, the UK and parts of Europe with PAUL D’IANNO and CONQUEST OF STEEL. I only got to catch them live one time, when they supporting D’IANNO in Nancy Spains in Cork just before they split-up. Even though it was only a support slot, they gave it socks and played a blistering set. There was talk on their old website about releasing a live album around the same time as the release of ‘Madness…’ but it never came about.

Around mid 2005 the band self-recorded a 3-track demo which was never properly released. The tracks were never fully finished but they showcased yet another side to the band. The track ‘Grain’ has a distinct ALICE IN CHAINS vibe running through it while also adding touches of Gregor McIntosh style solos to some sections. And the other two tracks, ‘Get Away’ and ‘Part Of The Machine’ merged the two styles from the previous albums and have a solid MEGADETH feel to them. However! The members felt the musical direction of the band was changing so they decided to put the band on hold. But eventually all parties moved on to other things.

During his time with SCAVENGER, Johnny Kerr was also playing drums for fellow Drogheda band DYSLUCSIC, with whom he played on all three of their albums. He also went on to play drums for TWO TALES OF WOE and was part of the line-up that recorded their debut album, ‘A Conversation With Death’. He is currently working on a project with Ross Duffy (ex-TWO TALES OF WOE) and Rob Drew (SERPENTANCE) called FUCKHAMMER with BAGGY (WAR IRON, THE NAUT, LESSHELP) who are currently working on their debut release. About 10 tracks have been written or are being worked on at present. Sample tracks have been made available through their Myspace page but there are plans for a proper release later in the year. The other three members of SCAVENGER are currently playing in an Indie band called DISPOSIBLE SEX TOYS. They have one S/T album released to date which is available to download from DSTBand.com. The style of music with this band is very far removed from their previous all-out metal roots, which is a total shame if you ask me because they were so fucking good at it.