Madness To Our Method by Scavenger (Heavy Metal, 2004) 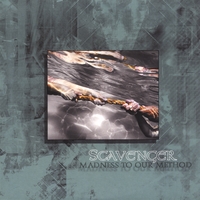 Big thanks to Johnny Kerr and Peter Dunne for allowing me to put all of SCAVENGER’s music up here for everyone to check out.
And to Brian ‘Scobes’ Taube at SENTINEL for giving the nod to allow the ‘Madness..’ album be put up for download. Not the first dig-out he’s given me with the blog.