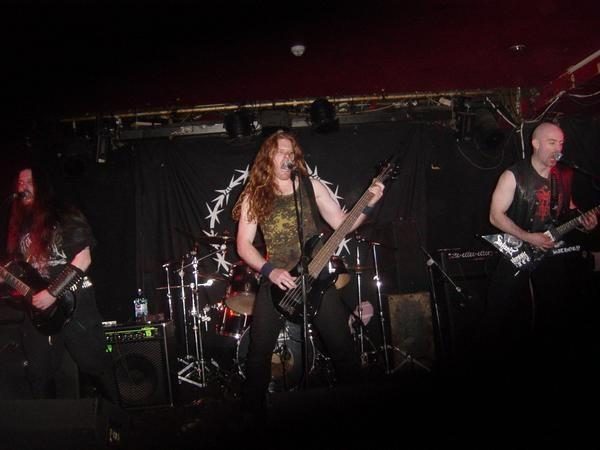 PRIMAL DAWN are a death/black metal band from Dublin, Ireland officially formed in 1996 under the name EVOLUTIONS END and rebranded in 1999 as PRIMAL DAWN.

They released one demo “The World You See” under their old moniker in 1998. Their first as PRIMAL DAWN was the self-titled demo/EP from 2000 which was followed up in 2002 by “The Euthanasia Programme”. They self-released the “Zealot” EP in 2006 which got re-released by Northern Horde Records in 2007 with additional tracks from the bands previous Demo/EP’s along with a live version of ‘World Within Worlds’ from the “Zealot” EP.

A full length album titled “ContamiNation” was recorded at Hellsound Studio in the village of Čestice in the Czech Republic in the Autumn of 2008, but the bands activity seemed to peter out before they ever got to release it and it has remained in limbo ever since. (watch this space…!!!)

Our music is based on pure extremity, brutality and sheer aggression, while our lyrics are of a philosophical nature.
Our sound is comparable in places to bands such as Angel Corpse, Axis of Advance and Allfather although our inspiration also comes from bands such as Vincent era MORBID ANGEL, MAHEM, THUNDERBOLT, early DEICIDE and BOLT THROWER etc.Our lyrical themes/influences include cultural and general awareness, strength of character, a Darwinian/anti-egalitarian worldview, reverence of our noble ancestors (and irreverence towards their wretched posterity), hatred of today’s values etc. To summarize, self-awareness, self-knowledge and self-improvement and the destruction of any obstacle that hinders the pursuit of this. Hopefully the semi-literate halfwits who have on occasion tried to associate us with any particular political ideology or group in the past will be able to dry their tears and untwist their panties for long enough to digest the actual ideology behind the band.”