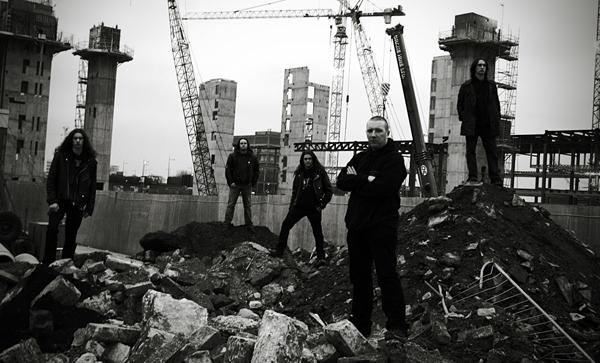 “MASS EXTINCTION, a “Face melting Thrash” Metal band hailing from Dublin, was assembled in late September 2003 by vocalist Tom Cunningham, guitarists Brian Brennan and Adam Shortt, bassist Larry Newman and drummer Jim Pepper. Displaying an “all out war” approach to the performance, a MASS EXTINCTION, show is as intense, energetic and stellar as they come! Drawing influences from the pure blood pioneers of the early 80s i.e. EXODUS, SLAYER, KREATOR, DESTRUCTION, NUCLEAR ASSAULT….up to the genre perfecting titans of second wave thrash….TESTAMENT, FORBIDDEN, et al. It was the calibre of these such bands and the distinct qualities they possessed lacking in the modern day metal culture that invoked an inevitable and highly volatile solution……REVOLUTION!

As the music was nearing transition from the writing process to widespread performance, then bassist Larry Newman musically parted ways (on good terms of course) in order to apply his full attention with Dublin heavy thrash merchants CARNIVAL CREATION, a band MASS EXTINCTION have proudly shared the stage with and undoubtedly will many times in the future! In the wake of his departure and with imminent gig dates and limited time it was imperative to find a suitably talented and enthusiastic replacement to complete the lineup. Displaying all of the above and more Simon Caffrey was recruited in from local thrash band DESOLATOR with a vengeance.

The four track demo of 2005 simply titled “DBAT” showcased the band at their very best and along the way helped build a massive worldwide fanbase for the band. They solidified this even further with the following “Creation’s Undoing” EP in 2007. And also were featured on the “Thrash‘n’Burn” a compilation showcasing some of the biggest names in Irish metal paying homage to their thrash heroes, with MASS EXTINCTION contributing a vicious rendition of ‘Kill On Command’ by seminal Bay Area thrash legends, VIO-LENCE.

MASS EXTINCTION have been fortunate enough to support some of their major influences: EXODUS, DESTRUCTION, ONSLAUGHT and NUCLEAR ASSAULT as well as sharing the stage with other international acts such as PUNGENT STENCH, G.B.H., SCREAMIN’ DAEMON and SLOUGH FEG. And in 2007 they played alongside numerous well known International acts at the prestigious Way of Darkness festival in Germany, the undisputed home of metal. In August 2007 the band also headlined Ireland’s “Whiplash” Metal Festivals in Sligo.”