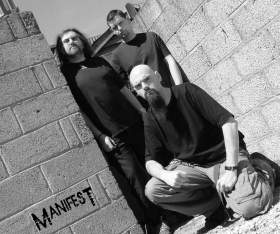 MANIFEST have been described as a band who have influences from Sepultura, Pantera and Machine Head. They recorded three demos… “Future Thoughts” around 1994/95, “Noise To The Untrained Ear” in 1996,”Before The Silence” in 1998. Tracks from the band were also featured on the “First Irish Heavy Metal Album” compilation and the “First Transmission” compilation with another 21 Dundalk based bands in 1997. And MANIFEST supported such bands as KERBDOG and PET LAMB and were regularly played on The 2FM Metal Show, as well as being selected as one of the top ten unsigned Irish metal bands of 1998 while Terrorizer gave the band a 7.5 for their last recording “Before The Silence”.

They reformed in 2005 with the lineup listed below to play a few gigs over the next 15 months, including Whiplash Metal Festival in Sligo, Ireland, and their last show in Spirit Store, Dundalk, with London’s goth rockers The Faces of Sarah. During this period the band recorded a cover of Death Angel‘s ‘Seemingly Endless Time’ for the Thrash and Burn: An Irish Tribute to Thrash compilation released through Underground Movement.