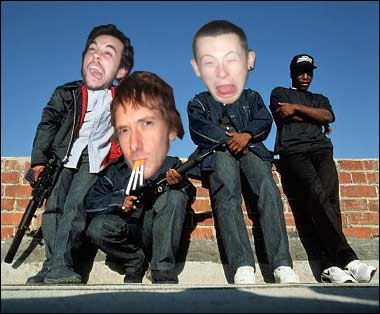 A bit of an oddball one for this site, I’ll admit! But it’s my blog! So tough shit!

LAMP started out in 2007 as a side project to a band called JEZERY. I first came across them on their split release with Cork’s notorious grind fuck-wits I’LL EAT YOUR FACE back in 2008. Not really my cup’o’tea, I have to admit. But they certainly grew on me over time. Then early in 2011 they released their debut album ‘Sagittarius’ (cover art is savage…). It’s a strange album at times with some jazzy bits thrown in every now and again just to throw things off-kilter. The closest comparison I can make to the music would be PRIMUS, but that’s only in their off-beat delivery. And the vocals remind of Maynard J. Keenan at times.

They released the album and their side of the split CD for FREE download on bandcamp. Towards the end of 2012 they followed up with the ‘TRIALS of TRAILS’ EP.