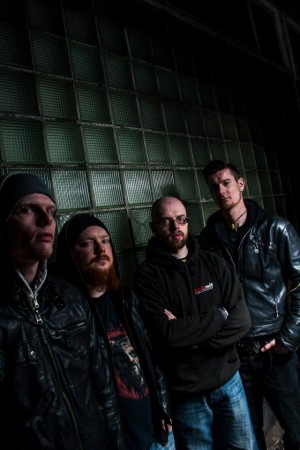 GACY’S THREADS are a 4-piece Hardcore Metal band that began in late 2007. Taking their main influences from artists such as CONVERGE, DILLINGER ESCAPE PLAN, EVERY TIME I DIE and NORMA JEAN but infusing it with each of their musical roots and influences to create something unique.

The band are always on the live scene and have been constantly gigging around Ireland and had a short tour of Hungary. They have supported acts such as FEAR FACTORY, CANCER BATS, FUCKED UP, AUGUST BURNS RED, HORSE THE BAND and THE LUCHAGOR.

To date they have released a self produced demo, ‘Eunuch’, which sold over 600 copies. And have released the 4-track ‘Savour Your Scars EP’ as well as a the live’Wolf Brigade EP’. All of which have just been released together as the ‘Collective Audio / DVD 2008-2010’ CD/DVD along with 2 exclusive live audio tracks and live video footage, limited to only 50 copies.

And their latest y are just about to release their latest ‘The Ignorance Of Purity EP’ which is due for release in the coming weeks. More on that when it’s released.

Check out ‘Black Heart’, the first track released from it here…

GACY’S THREADS latest release is ‘The Ignorance Of Purity’ which received ‘Album Of The Month’ over on Metal  Ireland. And the generous sorts that they are, GACY’S THREADS have decided to make it available to stream in full from the bands Soundcloud. So check it out in the embedded player linked below and if you like it, then buy it on CD from the band!

CD copies are available through SAVOUR YOUR SCENE records. The label was set up by Aaron Vance and Stephen Currie and will cater for all future GACY’S THREADS releases. And not being satisfied with taking care of their own little corner of the Universe, they have also signed up Belfast Hardcore Metallers BY ANY MEANS as well as Galway Prog/Hardcore outfit ILENKUS whose debut ‘Rule By Thieves’ has made a big impression on this listener.

Be sure to keep your peepers open for more from SAVOUR YOUR SCENE records.
Releases (7)
Videos (0)
Gigs (7)
Articles (2)
Zines(1)