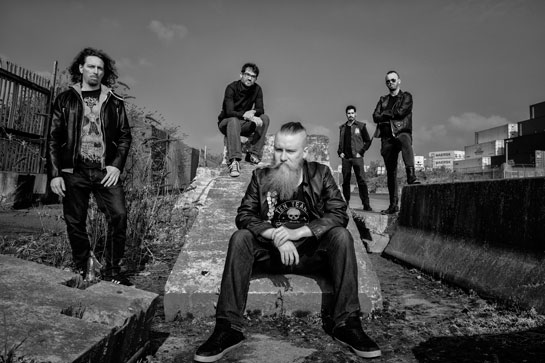 5-piece hard rock band from Dublin (Ireland), active since 2014, striking a balance between rock and metal with their powerful Hard Rock combined with a energetic live show. In November 2015 they released their debut EP, “The Prologue”, featuring 5 songs full of vigorous riffs that is only an introduction to what you could find in any of their shows. The band have played many gigs around Ireland since then, reaching the final of the Bloodstock Metal 2 The Masses Ireland 2018 battle of the bands with the judges vote and receiving very positive reviews from the press and playing alongside bands like Dead Label or Chris Holmes.
In September 2019 the band released their second EP “All Or Nothing”. 6 new and powerful songs that represent a more mature band and more elaborate songwriting. “All Or Nothing” swings between speed, heaviness and grooves to give a complete view of the band. And in mid-2020 the band released the single “Crossbones”.

At the beginning of 2014, Ian Kenna (rhythm guitar) placed a phone call to Cormac Murray (lead guitar) and suggested starting a band. By the time that phone call ended, Element X had begun. The very first drummer they met was the newcomer to the country, Rodrigo Alonso, and it was an instant fit. The regular practise sessions started at Troubadour Rehearsal Studios in North Dublin and with the wide variety of musical backgrounds and influences of each member, the band’s signature style soon emerged in their compositions. Completing the first line up of the band, Dave Cullen (vocals) and Sean O’Rourke (bass guitar) soon joined the project, bringing even more variety of styles and influences.

They quickly started to build up their song catalogue and play around the smaller venues of Dublin, getting a good response from the crowds. This led them to Loop Studios during the autumn of 2014 to record their first demo: 4 tracks which received very positive responses.

At the beginning of 2015, after the departure of Cormac Murray, the band recruited Finnish lead guitarist Atte Musakka and around June of the same year, they entered Red Lake Sound Studios in Port Laoise to record their first E.P. titled “The Prologue”. Consisting of five songs, it was officially launched on the 13th of November 2015, receiving great responses from listeners and media.

However this line up didn’t last long as Atte returned home to Finland to pursue a University degree and Liam Noctor joined, taking over the lead guitar spot. Always active on the live scene the band started preparing the material for its next studio recording, but towards the end of 2016 Sean O’Rourke and Liam Noctor stepped away from Element X and the band members’ long time friend Hugo Hernandes (formerly of Morality) joined on bass guitar and Ivan Roselli took up the lead guitar position. The band continued on, regularly playing live with audience reactions growing stronger and stronger, adding more original songs to their catalogue with their sound always evolving and maturing, but soon hitting another bump in the road when Ivan Roselli had to return back home to live in Italy. Before he left Ireland though, Ivan recommended Franco Buonocore (formerly of Syphor) as his replacement, who clicked very quickly with the band completing the current Element X solid line up.

In May 2018, the band reach the final of Metal 2 The Masses Ireland 2018 battle of the bands competition earning both crowd and judges votes along the way, showing the strong momentum of the current formation, resulting in September 2019 in the release of their second E.P. “All Or Nothing”: 6 new and powerful songs that represent a more mature band and more elaborate songwriting. “All Or Nothing” swings between speed, heaviness and grooves to give a complete view of the band.