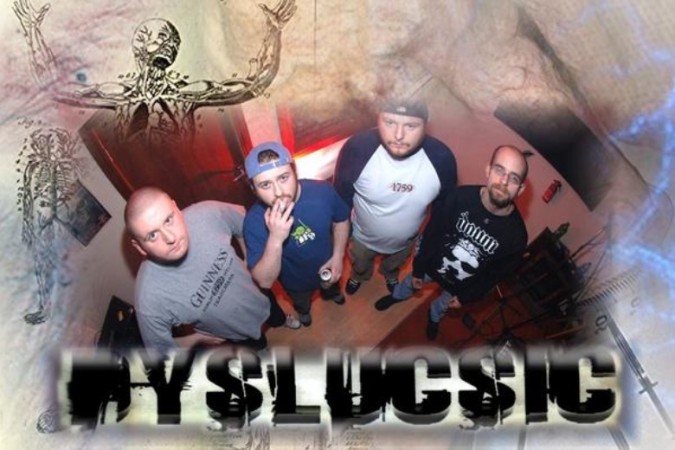 Following the break-up of both CISCO PIKE and GUILTY PARTIES in 1998, Spud asked Johnny if he’d be interested in jamming with him and a few others who were trying to get an original project together. Their first line-up went by the name SARCOPTIC MANGE MITES. ‘Rayo’ got the chop and Ollie took over on bass. Then they changed it to FUCKPIG. They did a few gigs playing some original and cover tracks. Things died down for a while soon after as Johnny joined the parent club and had a kid. Although he still managed to find his way into the drum stool for fellow Drogheda band SCAVENGER while FUCKPIG were on hiatus. But in 2002 they reconvened, changed their name once again to DYSLUCSIC which suited their heavy and humourous style and got to work rehearsing and writing for their first release.

They recorded the first 7-track demo ‘An Dog On An Wall’ with Brian ‘Boris’ O’Shea in Fatdog Studios, Duleek in 2002. Consisting of mostly older tracks they wanted to get recorded and a few new ones to boot. It was never properly pressed or released but the band did do some hand-made CD-R’s with printed covers for any interested parties. Almost immediately they began rehearsing and writing new tracks with even more mental, derranged and amusing themes and topics being the basis for their music. They returned to Fatdog later in the year to record their second 7-track release, ‘(Idin Idout) The Turd Place’, which was released in 2003. The bass tracks for this release were done by Shane as Ollie had left the band by this stage and was replaced by Kenn Bell later in 2004. There was also a DIY video made for track, ‘Attack Of The Chinese Curry Ghost’.

Their final offering, ‘God Looks Down On Your Sort’, was again recorded in Fatdog by Boris O’shea and was unleashed on the unsuspecting public in 2006. With track names like ‘Valley Of The Halflings’ and ‘Ugly, Pregnant, Homeless’, the band showed no signs of dropping their humorous antics. And let’s not forget the ‘interesting’ cover art for this release which you can check out below.

By 2009 the band had had run it’s course. Dispite the lack of serious lyrical content in their output, there’s no denying that musically DYSLUCSIC were a crushingly tight and heavy band. If they had taken themselves a bit more seriously then who knows how far they may have gone. I’ve no idea what most of the band are currently up to, but during his time with DYSLUCSIC Johnny Kerr was also playing drums for fellow Drogheda band SCAVENGER, with whom he played on both of their albums and an unreleased demo. He has since been in Dublin’s TWO TALES OF WOE and was part of the line-up that recorded their debut album, ‘A Conversation With Death’. He is currently working an a project with Ross Duffy (ex-Two Tales Of Woe) and Rob Drew (SERPENTANCE) called FUCKHAMMER with BAGGY (WAR IRON, THE NAUT, LESSHELP) who are currently working on their debut release. Around 10 tracks have been written or are being worked on at present. Some provisional tracks have been made available through their Myspace page but there are plans for a proper release later in the year.