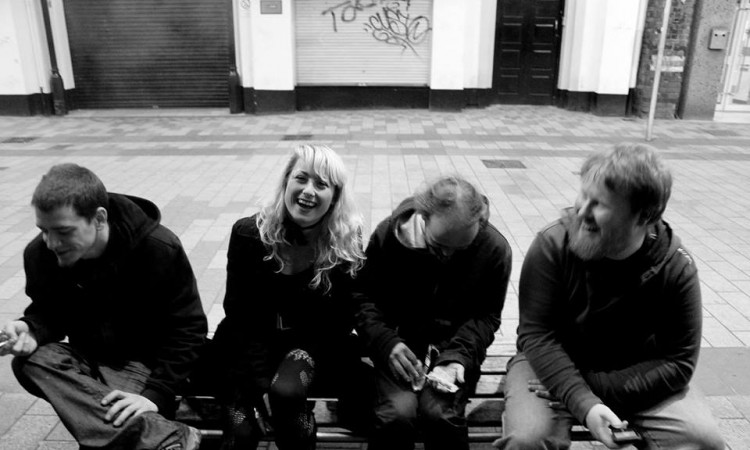 OK! So not an outright metal band. CRAFTY FUZZ have a lot of commercial appeal, for sure! Case in point being nods towards NO DOUBT on tracks like ‘Struggle Struggle’. But there’s also no denying this bands added appeal to Heavy/Stoner Rock fans on their heavier/bluesier numbers. The unit has only been on the scene for a short few years yet have been steadily building a rock solid reputation as a must see live band. Great musicianship and song writing all round… topped off with a glorious set of pipes from frontwoman Barbara ‘Babz’ Allen.

As well as their debut ‘Crafty Fuzz’ EP the band have a few other live studio recordings of original tracks floating around on the internet. Well worth hunting them down…!!! Allen has also lent her superb vocal talents to ELECTRIC TAURUS side of their recent split with PREHISTORIC PIGS on the track ‘Behind The Sun’. She’s also stepped in to perform female vocal parts for CRUACHAN at their gig in Dublin on 31st May 2014. Drummer Ross O’Connor is also a member of Black Metal band DÚNMHARÚ. And bassist Alan O’Hanlon is also a member of Doom Metallers NAUTILUS as well as owning and running Hi-Tone Studios in Dubin.

Official CRAFT FUZZ bio from facebook…
The first embers that became CRAFTY FUZZ formed in early 2012 but finally stabilised and came to be later that year. The band have since developed a reputation for being one of the hardest working on the road bands in the country and have received airplay on the likes of Radio Nova, Spin, Phantom, and 2fm. Taking influence from early blues to the classic hard rock sound of the 70’s and anything inbetween, CRAFTY FUZZ have formed their own unique concoction which will be available to hear at their ever expanding list of live shows around Ireland and on their debut E.P which is out NOW.