The Archive caught up with guitarist and vocalist Matt Casciani to get the skinny on the new split release and the band themselves. Here’s what he had to say…

Hey! Matt…
Thanks for taking some time out to answer some questions for the Archive.

I’d like to take this opportunity to thank the Irish Metal Archive for the great job you are doing for the Irish Metal scene. Aside of Metal Ireland there are not many publication that focus on the local scene. The new site is deadly and a good place to keep up with new and old bands.

Cheers, Matt! It’s nice to be acknowledged. Hopefully the new website will help to at least make things a little better for our local scene here in Ireland, and help get more Irish bands, such as ELECTRIC TAURUS, more notice that they deserve.

I suppose to kick things off! Maybe you could fill us in on the band? Who’s in ELECTRIC TAURUS? And how you all got together in the first place? 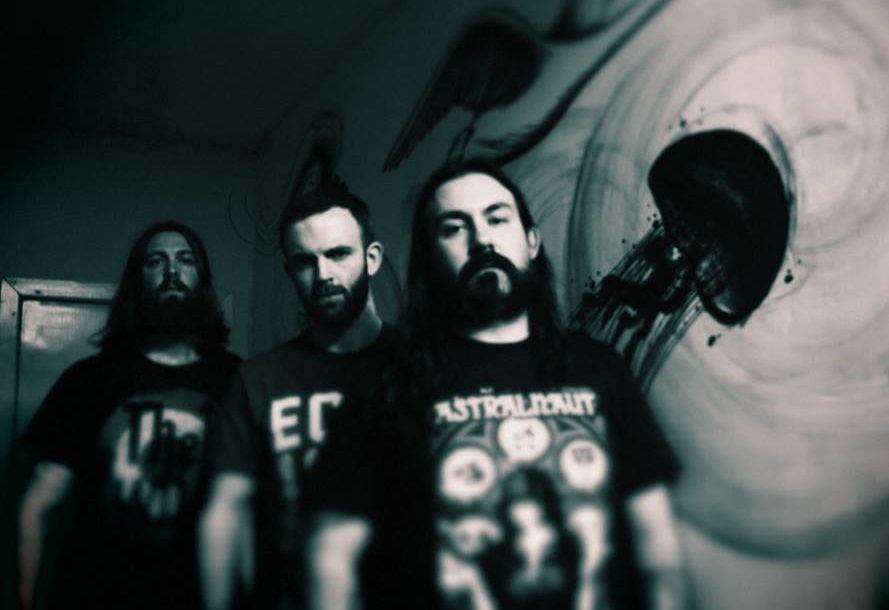 The band started in 2010 as a recording project and evolved over the last four years. I am on guitars and vocals. Mauro Frison is our drummer who is also drumming for CRUACHAN and ALTERNATIVE 4. Mauro and I met through common friends when he first moved to Ireland in 2011 from Argentina.

On bass, we have James Lynch, the only Irish man of the trio. James and I worked together for 3 years in the same company before discovering that had been a bass player. As with many other local bands, we been through different members but this formation has been going for the last three years or so.

We recorded our first demo ‘Into the Sun’ back in 2011 and in 2012, we signed with Moonlight Records, an indie label from Italy, and released our debut album ‘Veneralia’. We have been kept busy over the last three years playing mostly in Ireland. We also did a short tour in Italy and UK.

We all come from different musical background, but find a common interest in the 60’s and 70’s hard rock/prog and psychedelic bands. 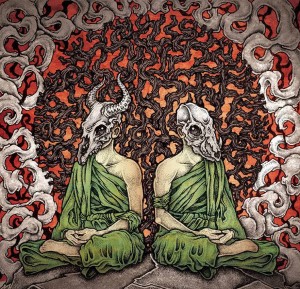 You have a new split release coming out. How did the pairing with Italian instrumentalists Prehistoric Pigs come about?

Both ourselves and PREHISTORIC PIGS were signed to the same label and our albums were released a month apart in 2012. We liked their album and their sound. In 2013 we invited them over for two shows in Dublin and we started to discuss the possibility of doing a split together.

I’m absolutely loving your new track ‘Behind The Sun’. It has a different feel to it than your previous album. Obviously the most notable difference being that you have a guest vocalist, but the track is also a bit more tripped out in parts. Would these be the reasons why you decided to include it on a split?

We started to work on ‘Behind The Sun’ last summer. At the beginning, it was around 25 minutes long and we understood that a song like this will be really difficult to fit on an album. From the early stages, we decided to release it as a single track so when Prehistoric Pigs contacted us for the split, we agreed that it was a good occasion to release it. 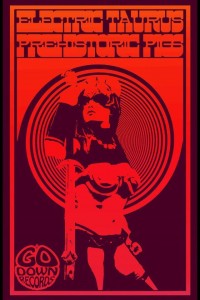 The song deals with the journey of the soul in the afterlife starting with the confusion of the bodies detachment in the intro part. Through the different stages, we tried to re-create the feelings and landscape of Hell, Purgatory and Paradise taking inspirations from different religions.

I immediately knew that I was not able to sing it properly as I am not a trained singer. I took the vocal duties from our previous bass player, Rob Sherry, when he left the band. We don’t want to add a singer because we want to keep the band as a trio. With a singer added to the mix, we would have to cut a bit on the jam side.

I always keep up with new bands on the metal/rock scene and one that intrigued me was CRAFTY FUZZ. We played a gig with them last summer and were blown off by their set and especially by Barbara, their singer. We quickly became friends and discovered that we had lots of musical interests in common and a week after the show, we asked Barbara if she would be interest in singing on the track. Luckily for us, she accepted. The music was recorded live, but vocals and some guitar beef tracks with extra percussion were added the second day. Barbara is a trained singer and she recorded the track including the double track in less than an hour.

You’re (Matt) also behind the Mother Fuzzers Ball and have been responsible for a lot of touring bands coming into the country, as well as regular installments of local talent. How did that come about? Was it a case of organising gigs for ELECTRIC TAURUS and it just expanded from there?

When we started to gigging back in 2010, we found it hard to find shows with the same kind of music. Mostly we had to play bills with different acts ranging from metalcore, indie, funk and blues bands. This was really hard for us as we were not motived on the night. 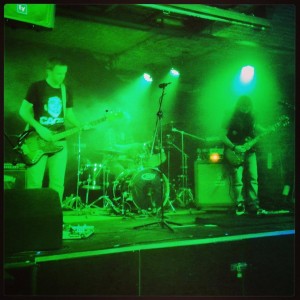 I met with Trevor Seery from the Fuzzed Out show and Desert Rock Ireland in March 2012. At the meeting, there were also the guys from WEED PRIEST, Ragas and Adam. We were looking closely at what was happening in UK and the continent with lots of new underground festivals taking place like Desertfest, Freak Valley, Stoned From The Underground and promotions companies dealing only with stoner/desert rock like Stoned Gathering, Solo Macello, Heavy Psych Sound. So we decided to try to start something like that with The Mother Fuzzers Ball. Over the last two years we cemented our reputation and we are keeping expanding with slightly bigger shows like CHURCH OF MISERY, SPIRIT CARAVAN and KARMA TO BURN and a new partnership with Demented Promotions. At present, I’m the only one in the band involved with The Mother Fuzzer Ball.

At the time that we decided to do the split, Mother Fuzzer Records was still in its infancy and was not ideal. Also, Go Down expressed their interest in both bands in the past. They are a successful label and booking agency with ten years history so it made sense at the time to release trough them.

With most stoner/doom bands, artwork is a major factor when it comes to a physical product. ELECTRIC TAURUS is no exception, with animal skulls seemingly a running theme. Is there any particular reason for the skulls? Or is it all down to the artists own interpretation of the band and the music? 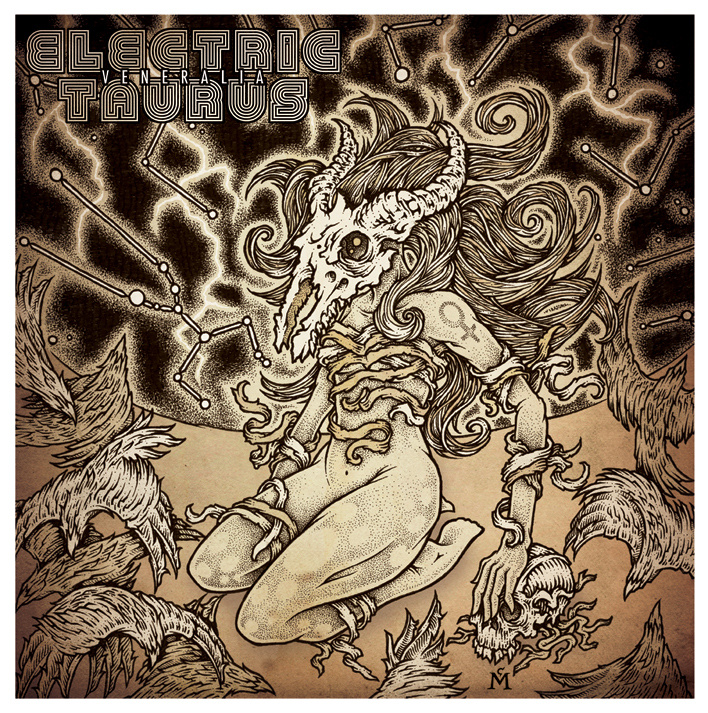 As a band, we draw inspiration from everything that is related to the Taurus constellation, be it astrological or historical. The constellation has always identified with the cult of Venus in ancient times. Veneralia was an ancient roman festival dedicated to Venus. On Facebook, I befriended Casey McKinley of McKinley Illustration. I loved his takes on H.P Lovecraft stories. The idea of the skull comes to underline that the cult of Venus is now dead, the sacrifices of bulls and priestesses bathing in their blood was part of the festival and the cult of Venus.

It’s amazing to work with Casey. We just give him the basic idea and by listening to the music he came up with the artwork. The one for the split is incredible. I think that we’ll keep the skull motif for the next releases.

Have you any plans to team up with Prehistoric Pigs for some shows to promote the split?

Originally we were supposed to have a release tour in Italy with them but conflict in schedules made this impossible. We are trying to book some shows over there this winter.

Any plans for more releases like the new split? Or will you aim for another album or EP of your own? What are the long term plans for Electric Taurus?

We’ve decided to record an EP to be released through Mother Fuzzer Record this winter. We are also closing a four day tour in France in October. We are looking to gig a bit more outside of Ireland and try to play more festival over the next year.

Thanks a million for sparing your time, Matt!
And all the best with the new Split and the rest of 2014.