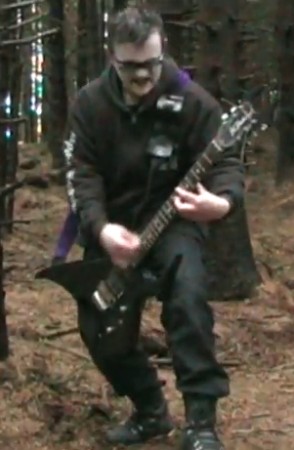 “CHRISTORGY is a one man brown/grind/stupiditycore project from Enniskillen, Northern Ireland. CHRISTORGY shat itself into existence in 2005 after the demise of the universally ignored (and frankly piss poor) TOILET PROBLEMS.To date Christorgy has allowed 3 releases to escape captivity and clog the arteries of an uninterested and frankly disgusted public….”   –   John Moffatt (Tiberius Nyarlethotep).

The first EP, ‘Drugs We Didnt Pay For’, was released in 2006 and given out for free at gigs and festivals around Ireland. Around 300 copies of this release were made. The second EP, ‘Bring Me The Head Of Aynsley Harriot’, was released in 2008 and found its way round the world with various DIY distros and Mail Orders.

The third very limited release incorporating both the first two EP’s and a collection of demos, utilised the talents of various Irish underground musicians (On Pain Of Death, Sorrowfall, Darkest Era) as vocalists and guitarists. Originally planned to be called ‘Surrounded By Cocks’, in the end it was called ‘Eaten By Angry Vegans”. Take note that the ‘Eaten By Angry Vegans’ EP has never really been finishedas by his own admission, Tiberius Nyarlethotep is “brutally lazy and cant be arsed to finish the vocals”.

There is also a compilation CD that was released called ‘Grim As A Festival Toilet – The Absolute Worst Of Christorgy’. It featured tracks from the first two CD’s plus a bunch of outtakes, most of which are included in the downloads below. I’ll see if I can get the other one or two missing tracks from this release.