This time courtesy of our good friends at Jetrocker who have put together a killer line-up at ‘On The Rox’ Dublin on the Friday the 7th October. 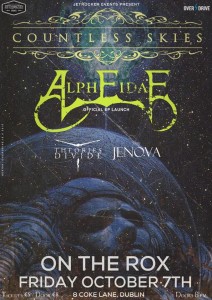 with
JENOVA and THEORIES DIVIDE

This competition is now closed.

Taking the stage will be the UK’s COUNTLESS SKIES, who burst onto the modern metal scene with their self-titled debut EP in late 2014. Blending progressive and darkly intense music influenced by their Scandinavian melodeth heroes, the EP began a flood of shows up and down the UK. After winning the Bedfordshire ‘Metal to the Masses’ competition, they secured a slot on the New Blood stage at the UK’s No1 independent metal festival, Bloodstock Open Air 2015. Building upon their rapid momentum, they continue their conquest of the UK and will release their debut full-length later this year through Kolony Records. With a tremendous start, the future looks bright for COUNTLESS SKIES.

Co-headlining will be Dublin’s own ALPHEIDAE. The band consists of guitarists Ros Coghlan (lead) and Leon Bourke (rhythm), bassist Gavin Wynne, drummer Zach Parkinson and vocalist Calvin Singleton. On February 21st, 2016 Alpheidae released their first single ‘Altruist’, the song and video capturing the band in its purest essence. The single is taken form the bands upcoming debut EP, “The I In All” which is being launched on the night, with copies available from the band.

JENOVA is a melodic death metal band based in Dublin that takes influence from the more extreme sides of metal and prides itself on its intense live shows. Jenova released its first single, ‘Nail the Eye’, in August and plans to return to the studio soon, as well as continue gigging across Ireland and beyond.

THEORIES DIVIDE is a four piece metal band from Dublin, Ireland. Formed in 2010 with a true passion for powerful music, they infuse technicality, groove, melody and controlled aggression while remaining true to the core values of heavy metal. Bruising breakdowns, catchy choruses and scintillating combine, to make the live shows a frenzied spectacle for the audience.