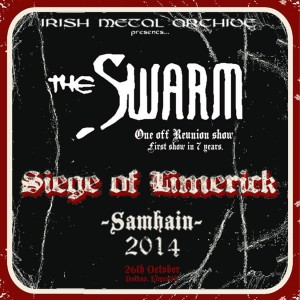 With this Easters impending Siege Of Limerick only a few short weeks away, we give you another full live set from the last ‘Samhain 2014′ installment. A one-off reformation of one of Limerick’s own all-time greats… THE SWARM. Apologies for the very dodgy sound on this recording, but trust me… it sounds way better than it did to begin with…!!!!

THE SWARM were a Limerick based Death Metal outfit formed in 2001 and featuring members who had previously been in MORTAL AFFLICTION, ESTRANGE and RETRIBUTION. They were very active with gigging, playing with many other Limerick based bands such as DISCORD, VICTIM-X, BLESSED DARKNESS, MYSTERIES END, ROPER and CALZINO FIASCO. They also played at Ireland’s ‘DAY OF DARKNESS’ Metal Festival alongside many other Irish Metal acts. As well as landing support slots for HATEBREED, FIREBIRD and ANTHRAX.

They released two EP’s, “Bruise The Flesh To Black” in 2002 and “Six Acts Of Atrocity” in 2004. Both of which were very well received in the Underground Scene. After THE SWARM broke up, Mick and Decky moved on to form their current band ZEALOT CULT with members of another Limerick based band called VICTIM-X that also disbanded around the same time.