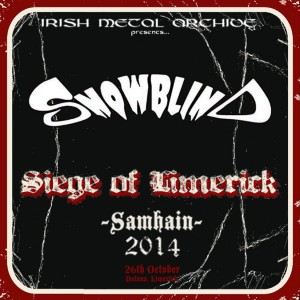 OK! So continuing our re-cap of the last ‘Samhain 2014′ installment of the Siege Of Limerick, we give you a couple of tracks from Dublin’s SNOWBLIND.

SNOWBLIND formed in late 2011 by drummer Jake McCarthy and guitarist Sean Boland with Ian Mckeon caming in on Bass and Vocals in February 2012 to complete the formidable power trio formation. They have since been rehearsing and playing gigs regularly and are well established on the Irish metal scene.

Their music combines elements of progressive, thrash and classic metal. Steadily writing a host original music, some of which were recorded and released as online demos back in 2012/2013 (Birth Of Your Demise/Regretfull Roots/To The End) which are all available for free download from bandcamp. SNOWBLIND released their debut EP “Existence Is Futile” back at the beginning of 2014.

The band recently supported the mighty COLDWAR at the first ‘Irish Metal Showcase’ gig in Fibbers on the 6th Feb 2015. And they will be battling it this Saturday night at the fourth heat of the ‘Bloodstock – Metal 2 The Masses, Ireland’ competition, again in Fibbers, for a chance to play at this years Bloodstock Festival.

Thanks a million to SNOWBLIND‘s Ian McKeon, who I spoke to on the day, and the rest of the band for allowing these tracks to be made available. And thanks also to Tall John and Ciaran Culhane at BadReputation Ireland for their help in organising the recordings.