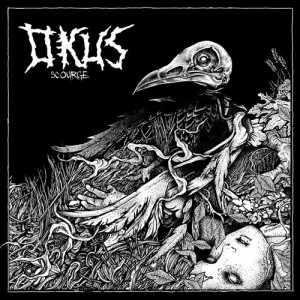 So to whet your appetites for the upcoming slab of crusty riffs the band and label have revealed the amazing artwork for “Scourge” which was created by the one and only Sean Fitzgerald.

We have also been treated to a brand new track, ‘Buried Deep’ which is now streaming via Distro-y Records and as expected it is a truly vicious short, sharp, shock to the ears.

“A New Year, a new release although I think many of you are already may be aware of this but it is with great pleasure to announce we will be releasing OKUS vinyl debut “Scourge” this Spring.

Having been a back bone of the Irish hardcore/crust scene over the last number of years, the dooming crust behemoth of OKUS returns with “Scourge”. 9 tracks of blackened crust whose dooming crust wrapped in a metallic heftiness and misanthropic hardcore propelled by galloping drums with D-beat and blasts from the one and only Crispo and rough vocals focusing on a nihilistic and bleak look at the world based on religion in some way, through war, religion, economics.

With already having released a crushing Self Titled 7 track CD on Underground Movement, SCOURGE enclosed in artwork by Sean Fitzgerald, who previously done the artwork for the CD. Recorded and mixed by OKUS‘ Johnny Kerr at Dead Dog Studios Drogheda. “Scourge” will see a crushing crossover of crust and dooming metal that “If you cut your teeth on the likes of AMEBIX and NAPALM DEATH, you’ll be in heaven with OKUS.” (– The Sleeping Shaman)

“Scourge” will be released in May 2016 on Distro-y Records and Chainbreaker Records.